After last month’s announcement of the Yureka Yu, the Micromax subsidiary is launching a flash sale on Amazon India starting tomorrow, January 13. 10,000 units will be made available at a price of Rs. 8,999 ($145). 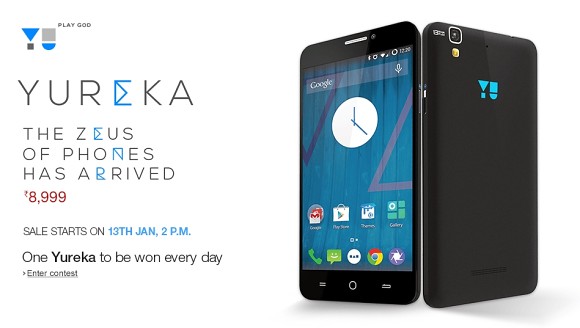 The 4G-enabled smartphone packs a 64-bit Snapdragon 615 chipset with an octa-core CPU running at 1.5GHz and Adreno 405 GPU. The spec sheet continues with 2GB of RAM and 12.5GB of available storage, which is expandable by microSD up to 32GB.

A 5.5-inch display of 720p resolution dominates the front, flanked by a 5MP selfie snapper. The main camera utilizes a Sony IMX135 13MP sensor behind a relatively fast f2.2 lens. A 2,500mAh battery will be the power source of the dual-SIM device.

Yureka is in a unique collaboration with Cyanogen, delivering the stock Android look with an extensive range of additional tweaks. In another attempt to lure tech-savvy users, the Indian company will allow the phone to be rooted without voiding the warranty, thus opening up possibilities for even further customization.

Yes I can't purchase it is out of stock in amazon.in plz give more stock to amazon.in

It is good mobile or not

When i will get micromax yureka phone !!!!!!