ARM and TSMC announced today that the first ever Cortex-A57 processor has been taped out and is ready to hit mass production. 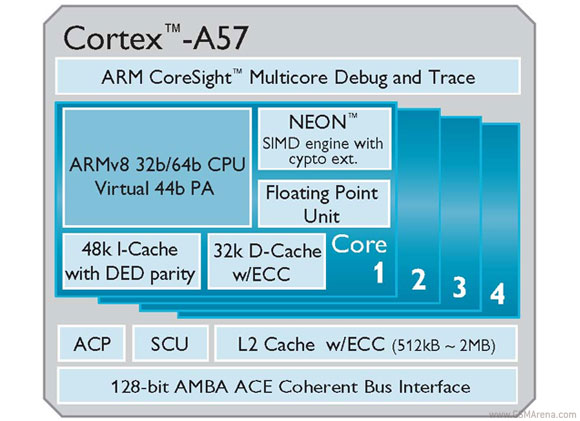 The new chip utilizes TSMC's 16nm FinFET manufacturing process, even though the transistors are still 20nm. Still, ARM says the A57 outputs up to three times the CPU power of the Cortex-A15 without affecting battery life. And if its battery life you're after, the A57 can match the Cortex A15 performance while consuming up to five times less power.

ARM says that the new chip will find its place in future tablets, high-end computers and server products even. Quite extraordinary considering it took ARM and TSMC merely six months to get to the "tap out" stage of the process.

Sadly, specifics on the chip's launch and landing in potential high-end smartphones havent been given. We'd advise you to not hold your breath, as the Cortex-A57 CPU might not see its launch for at least another year.

Don't use 'we' because it's possibly just you

I think you need to learn before you speak, apple do actually redesign the chips to their own spec, samsung did at one time only manufacture them for apple, to apples spec,but don't anymore.

First of all apple doesnt do anything with chips. Samsung does with apples chips. Secondly its not apple or "samsung" super perfect modifying it. Its ios being a system wide restricted locked os that does nothing but launch apps. Learn some...