What’s in vogue, what’s fallen out of fashion? It’s that time of year when we look back at phone trends over the last 12 months and space permitting we may even make a few predictions for next year.

So, using our extensive phone database and test results, let's power up our machine learning algorithms and feed it the 50 most popular phones based on your browsing and search patterns here at GSMArena.

These 50 phones will represent our definition of 'the market' and as we're not splitting them down by flagship, mid range or entry level we can average them out to give you the hard facts to those trends you probably already know about.

Of course, the most visual trend for 2017 was the stigmatization of the bezel. The space freed up by the 'chin' and the 'forehead' allows for a taller display and hence the move to displays with taller aspect ratios including 18:9 and 19.5:9. As a result, the average height increased by 3.65mm to 151.36mm with a slight increase in width up .88mm to 73.88mm. 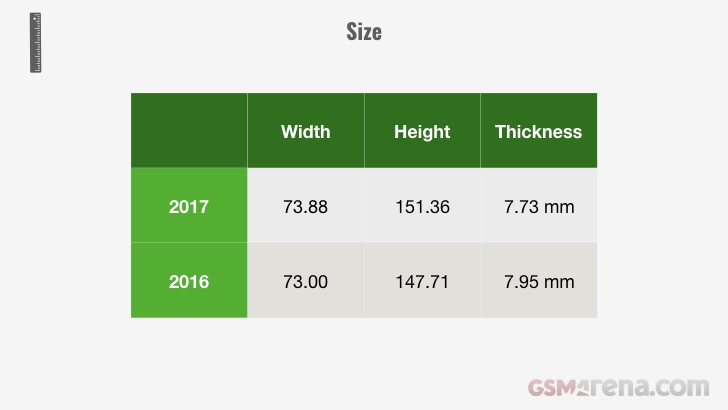 So how about that display

This is the point were you may be thinking 'what - these are such small numbers'. The great thing about averages is that if just one phone had a big display it would hardly register - one phone doesn't make a trend. 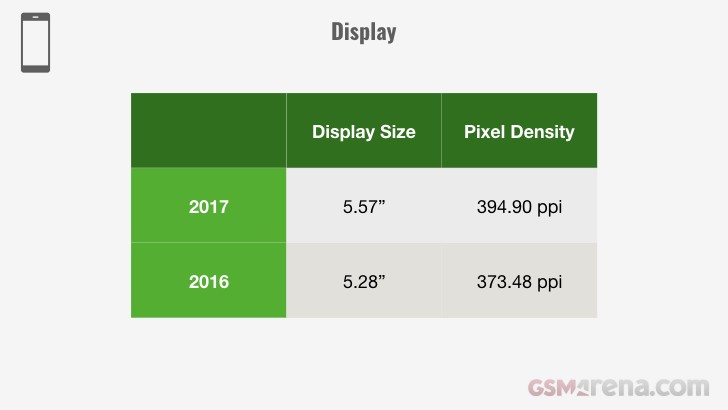 So whilst our phones are getting thinner and taller surely they weigh roughly the same? No, in 2017 our phones got heavier with an average weight of 161g, an increase of 12g from last year. There could be a number of factors at play here but we also saw a 14% reduction in the use of plastic in our phone cases to be replaced with aluminium, metal or ceramic. 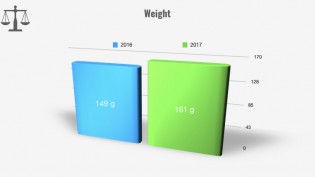 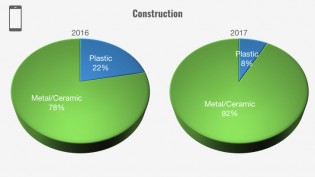 Our phones are getting heavier • Metal, glass and ceramic construction could be making our phones heavier

Whilst we're on the subject of phone construction, the number of phones that gained the more useful IP68 Ingress protection rating increased by 10%. 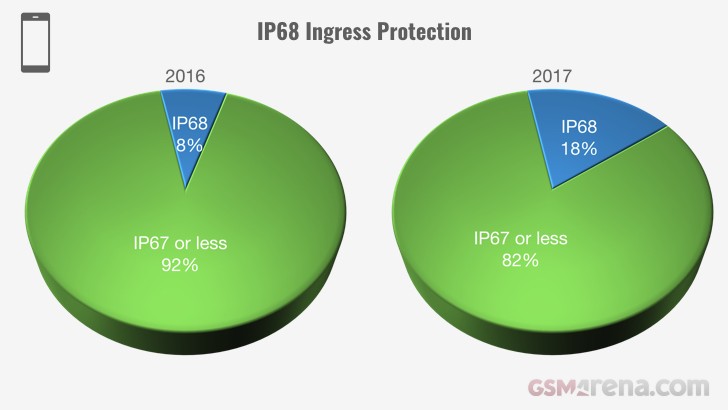 Casualties of the banishment of bezels

Next year we've been promised through the glass finger print sensors, with Vivo being named as the first manufacture to deliver this. If the technology is ready for prime time and performs reliably and quickly this could be a game changer which sees this trend start to reverse. 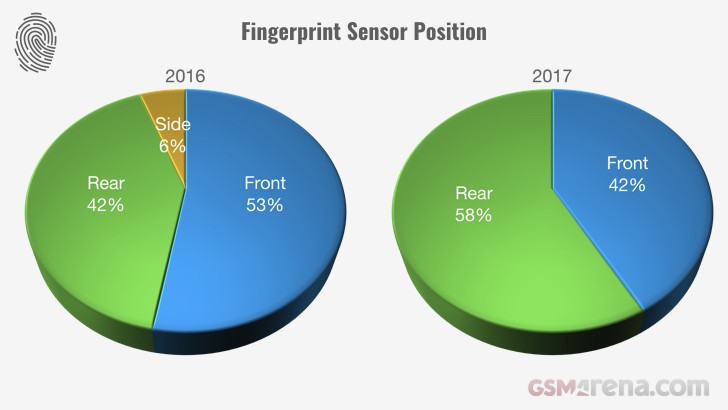 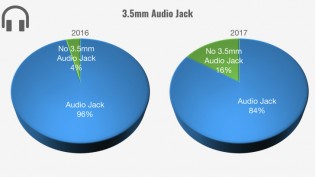 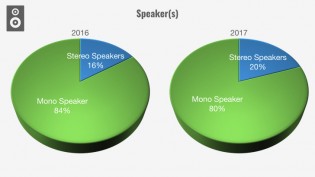 The 3.5mm jack on its way to extinction • Our phones are sound better every year

Wrong - actually average battery capacity increased slightly to 3292mAh. Good news, well not quite - battery endurance dropped quite significantly from 60.5 hrs to 54.3 hrs. This result was a surprise to us and one trend we don't want to see continuing.

The good news is that its even easier and faster to charge our phones with wireless charging now in 16% of phones and 58% of phones supporting Fast charging. 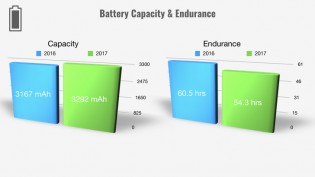 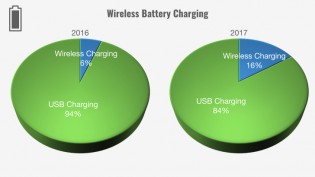 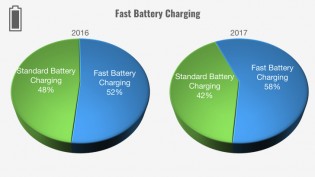 Like us you probably noticed that the megapixel war ended a couple of years back with the focus being on the quality, so it came as no surprise to see the number of megapixels in the primary camera stay about the same.

We're living in the age of the selfie though so as again it didn't come as a surprise to see the number of megapixels increase substantially in our front facing cameras. 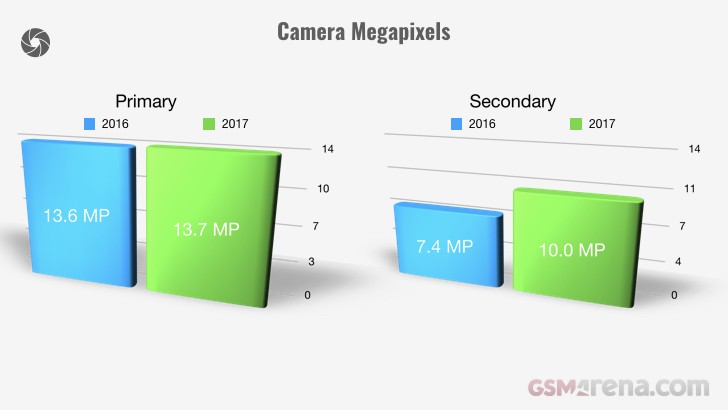 The number of phones with Dual Lens primary cameras saw a significant increase this year with 34% of phones now using them even though they may have different implementations.

We saw less dramatic increases, but increases non the less in the number of phones packing Optical Image Stabilization and 4K video recording. 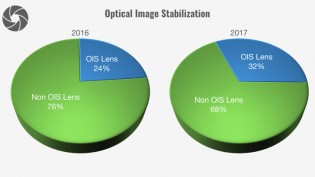 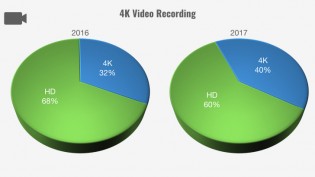 This shouldn't be an area that carries any surprises but it's interesting to see the raw figures and still the significant step changes our phones are taking.

In both our CPU and GPU tests we saw excellent gains along with a massive increase in LTE performance.

More storage and RAM are always good to have and we saw a good jump in both. 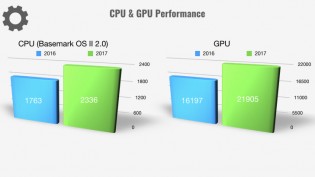 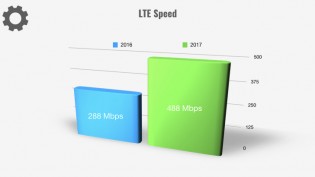 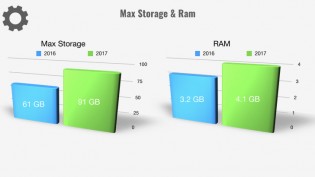 The flagship phones seemingly made all the waves by their prices setting new highs but behind the scenes everybody followed, albeit less slowly. The result, the average price rose to 408Euro, up from 314Euro. 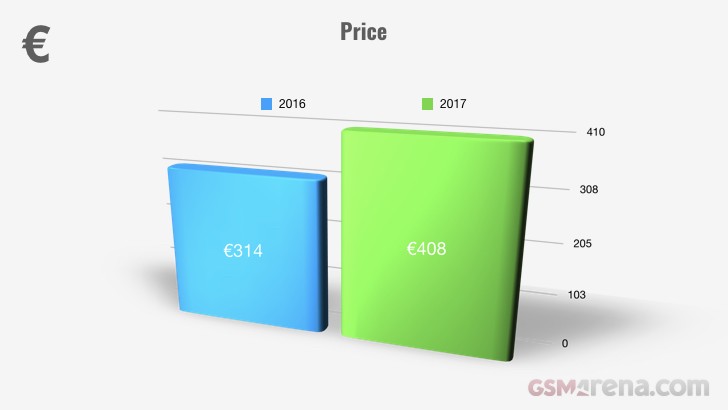 It wasn't just flagship phones that increased in price

So another year is over and we're already looking forward to next years releases and the subsequent rumors that proceed them.

Whilst the majority of the trends we already knew it was good to see them backed up by tangible numbers. As consumers we've never had it better, ok we have to pay for it sometimes but it's good to see our phones getting bigger and better displays, more storage and that just keep getting faster.

It would be good to see some of these trends reversed, I'm looking at you - battery endurance, and that no new ones are introduced - looking at you here Apple, I don't think it will be long though before Apple remove the volume up and down buttons!

"So, using our extensive phone database and test results, let's power up our machine learning algorithms and feed it the 50 most popular phones based on your browsing and search patterns here at GSMArena. These 50 phones will represent our definiti...