It seems that the 256GB version of the Galaxy Note8 will not only come with quadruple the storage of the base 64GB model, but some premium goodies as well. There will be a promo in South Korea there that offers you a choice between an AKG Bluetooth speaker and a Nemonic printer (think PostIt notes with cloud integration).

The 64GB model will come with a coupon for up to KRW 100,000 off accessories like the Gear VR or a combo of case plus external 5,100mAh battery. These are just examples, there should be more options come launch time. This somewhat ties into the report of Samsung offering cases with the Galaxy Note8. 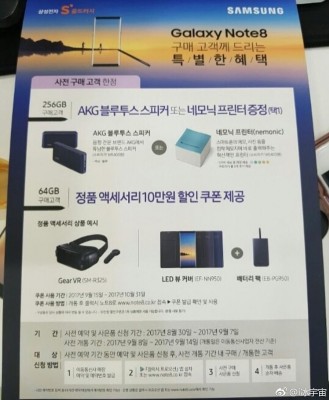 Flier confirming the 256GB version of the Samsung Galaxy Note8

Note that a 128GB model is expected to be available in the West. In fact, the 256GB model may not be go outside of South Korea and China.

Same here. Thought that way for months since Galaxy 8 announcements....

I will wait for the 256GB version, if it's not available for Europe, then no Note8 and no Samsung from then on for me. I don't need to spend money on a brand that considers me as a 2nd class customer just because of the region I live in.

Obviously they were being funny