ST-Ericsson unveiled their latest 2.5GHz NovaThor L8580 CPU earlier in this year, but the company is now readying to showcase an even faster version of the chip at MWC 2013. 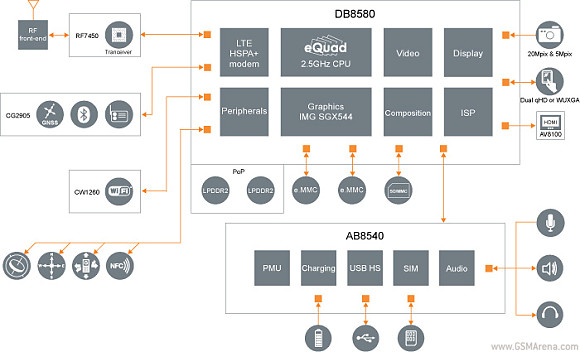 The four Cortex A9 cores residing in the NovaThor L8580 (or eQuad, as it's also dubbed) that's going to be on display at MWC are going to be clocked at 3GHz. In order to not drain the battery in a heartbeat, ST-Ericsson have build the chipset using the 28nm FD-SOI manufacturing technology.

The company has also utilized ModAp, which optimizes the execution of apps and as a result runs them up to 35% faster. The chip comes with support for dual cameras (of up to 20MP), HD Voice and LTE. The GPU is going to be of the PowerVR SGX544 variety clocked at 600MHz.

Naturally, the 3GHz NovaThor L8580 CPU in question is just a prototype at the moment, but hopefully, we'll get to play with it in Barcelona and put it through some benchmarking.

Using a SOI manufacturing process is going to make a big difference! This looks like it will be one excellent chip, and I believe the power consumption claims will be good. Remember, the clock frequency in all modern processors is dynamically adjuste...

manufactures have prove that they can add ridoncelous power to the procesors wich in android is need it. what users want and what we need is batterry power. it doesn't matter how much ram or cores or power they add if the batterry cannot stand m...