6.1" LCD iPhone Xr to join the iPhone Xs and Xs Max at Apple's event on Wednesday

Apple is announcing three new iPhones this Wednesday, and recently we got word that two of them would be called iPhone Xs and iPhone Xs Max, respectively. Today a new report finally sheds light on the official name of the third model - it's going to go by iPhone Xr.

The iPhone Xr has, up until this point, been referred to as the 6.1" LCD iPhone, and it will be the cheapest of the bunch. Keep in mind this is still Apple we're talking about, so "cheapest" will translate into a starting price of $699 to $749 according to most analysts. Some even expect it to be priced from $849, though. 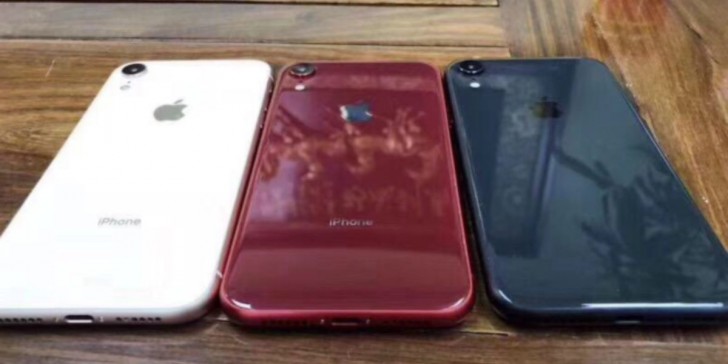 To keep its price lower than those of its OLED-endowed siblings, the iPhone Xr will also go with an aluminum frame, eschewing stainless steel, and a single rear camera. The A12 chip should power all three, but the Xr may get 1GB less RAM than the other two.

Images purportedly showing the iPhone Xr leaked out just a few days ago, portraying it in four color versions. It will be the most colorful iPhone of 2018, since the Xs and Xs Max will each only come in three hues (adding gold to the mix, alongside the Space Gray and silver options introduced by the iPhone X last year).

The iPhone Xr may be released a few weeks later than its siblings, because of "minor complications fitting backlights for the LCD screen", according to people familiar with the matter. It might even ship in limited quantities for a while after it arrives on the market. One analyst thinks that, given this situation, Apple could be tempted to delay its availability to gauge demand for the more expensive models.

Well. It does get a little cutout from my paycheck for the insurance. So not all is roses. ^^; plus. It's an OS I don't exactly like if to say it kindly.

Lucky you. You get the latest and greatest of everything without having to pay for it every year.