Apple has released its latest iOS adoption numbers, revealing that the version 9 of its mobile operating system now powers 75% of compatible devices. This means that three out of every four mobile devices from the company are currently running iOS 9. 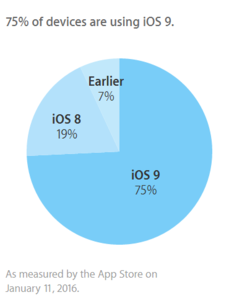 The number stood at 70% last month, and 66% the month prior. So as you can see, the iOS 9 adoption has been steadily increasing. In fact, back in September last year, when the adoption crossed the 50% mark within just five days of the OS' launch, Apple said it is the fastest rate ever seen by the company for a new OS iteration.

Just recently, Apple released the first beta of iOS 9.3 for developers. It includes features such as multi-user support for iPads (although at the moment it's only available for schools) as well as Night Shift, which adjusts the colors in your device's display to make sure that your eyes aren't exposed to the bright blue light after sunset.

Just in case you aren't aware, the adoption numbers are calculated based on the usage of Apple's App Store.

No that is not totally true,after the release of iOS 9.2 I've starting receiving messages from apple to update my device and I've got 2 options when one message was appeared on the screen: update now or later,so that means that they are forcing you t...

I haven't upgraded and many people I know that own this obtuse POS will not! This phone is subpar and inferior in every spec. Why waste the time or the money? Oh yeah, I've owned the 3, 3gs, 4, 5 and 6. All of them have been nothing but problems...

I have nexus 4 it's running on lollipop and never had any lag and performance issues with it. Yes, nexus 4 didn't receive marshmallow update that is good decision. Coming to iPad why Apple is pushing useless updates and which lead the devices totally...