A batch of red LG Nexus 5 units caught on camera

LG might be readying new colorful edition for the Nexus 5 flagship after all. First we saw what seemed to be an official Play Store listing with six new colors - yellow, red, blue, green, orange, and purple. Unfortunately this turned out to be fake. And just when we thought the rumor is dead, we saw a red Nexus 5 posing in front of a camera.

Today we get to see something better - a whole batch of red-flavored Nexus 5 retail boxes. You can see official markings, IMEIs, serial numbers and everything. 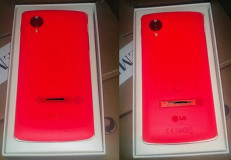 It seems the red Nexus 5 is real and will probably launch shortly. The previous rumors suggested a yellow edition is coming too, so those six new flavors might deserve the benefit of the doubt.

This phone's so sweet in red. It's a shame about the battery though, otherwise I'd get it just for the sake of owning a Nexus.

Chinese New Year abaout to Come, i think that's why they using this RED color .. :D