A duo of newly-leaked alleged HTC M8 photos made the rounds on the web. In line with previous leaks, the photographs showcase the smartphone in different color scheme from the aluminum finish we’ve seen this far. 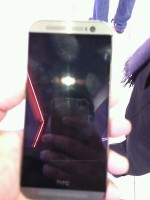 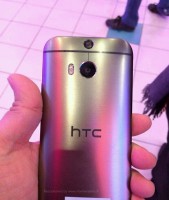 As you can see in the images above the black polycarbonate line on the back of the HTC M8 reveals that the device does not sport the usual aluminum finish. In the case of the latter, the polycarbonate elements around the device are finished in white.

We cannot exactly place the color of the handset in the images because of the poor lighting. However, gold color scheme looks like a safe bet. The Taiwanese manufacturer released a mass-market gold version of the HTC One late last year, which looks quite similar.

Different color aside, the images gives us yet another look of the device’s dual-camera setup, including the two-tone, dual-LED flash. The front of the device on the other hand, holds no surprises with its lack of physical buttons for navigating Android.

HTC‘s next Android smartphone flagship is expected to debut in March with Qualcomm Snapdragon 800 SoC, 4.7" or 5” 1080p display, 2GB of RAM, dual 5MP camera setup, and Sense-d Android 4.4.2 KitKat. A mini version of the flagship is also rumored.

Glad to know someone has to be insane to have a different opinion.

It's not Gold but rather a very dark silver color. It's somewhat hard to really see in this particular photo.

You sound like a brainwashed person. I have a One, it's an amazing phone but this m8 leak looks very bad. The bezels are too big, still that htc logo on the front, it makes no sense. That dark leak without the logo was an amazing phone. This is just ...