While the Xiaomi Mi Watch is far from the first or only wearable to come from the ranks of the Chinese company and its subsidiaries, it represents a whole new take on the smartwatch game. As such, Xiaomi's elevated software support efforts for the wearable hardly come as a surprise. Hot on the heels of last month's eagerly-anticipated iOS support addition, the company is now teasing a new update on Weibo. 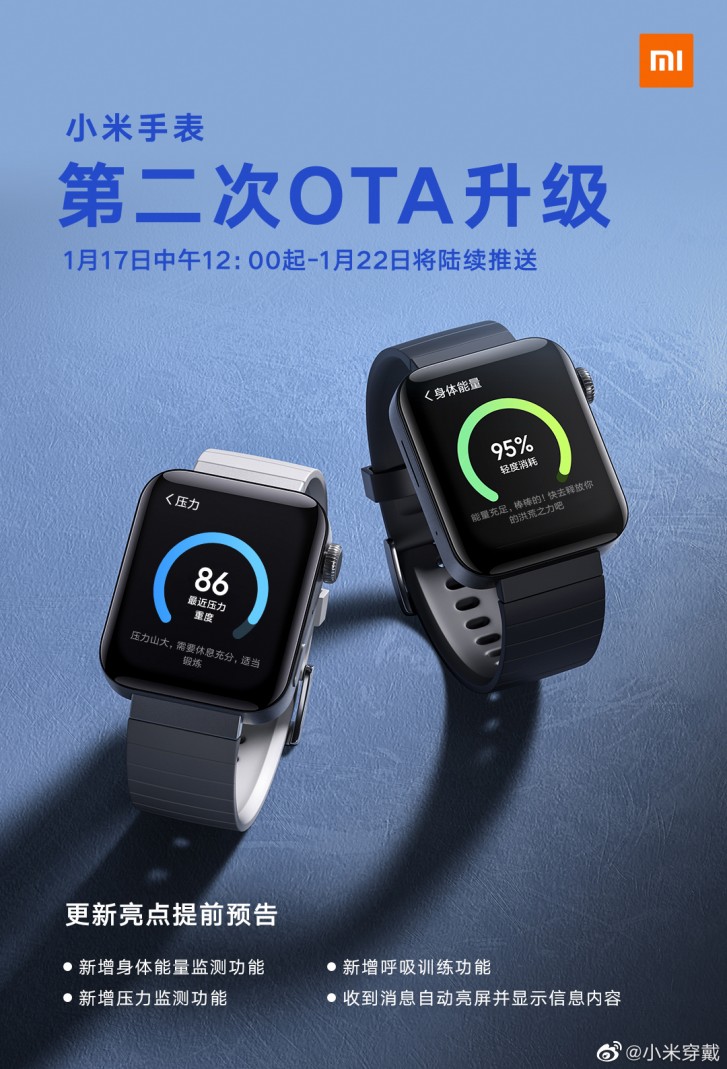 Our Chinese is a bit rough around the edges, so we might have missed a minute detail or two, but the OTA highlights seem to include a couple of new fitness features: stress monitoring and and what we can best make out to "body energy monitoring". The first metric is pretty straight-forward and we can kind of imagine Xiaomi meant SpO2 measurement with the latter.

The update will also bring breathing training exercises. Finally it will deliver an improvement to how the Mi Watch handles notifications. When a new one is received, the watch will now light up and show a preview of the message in a colorful interface. Sounds pretty good to us.

As per Weibo, this second Xiaomi Mi Watch OTA should start seeding on January 17. Interestingly enough, the post also mentions what looks to be an end date - January 22. We can only assume this refers to some sort of staged rollout, where some units will start getting the update a bit later than others - perhaps the new iOS application branch OTA will be pushed back a bit.

Apple was not the first with a rectangular smartwatch. A rectangular watch is also so generic I don't think there is even any licensing for it, same as for round ones. Even though they have similarities, they are also very different. ...

It's similar but not a copy.