We were expecting Samsung to decorate its Galaxy S5 smartphone with the usual spin-offs like the Active, mini and Zoom. What we didn't expect was for Samsung to shift to a whole new naming scheme but according to a new leak the Galaxy S5 Zoom will be called the Galaxy K Zoom.

And to solidify that he know what he's talking about the source has a photo of the actual Samsung Galaxy K Zoom's back revealing some more interesting details - the lens, flash and some of the design. 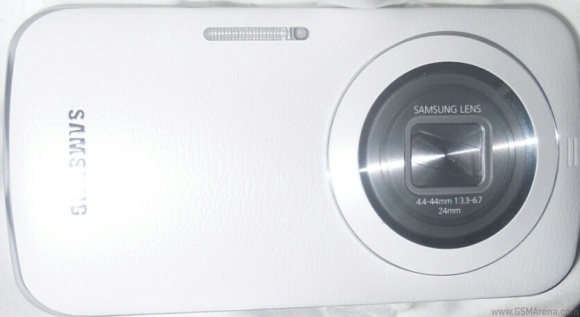 Just as previously reported the zoom lens really doesn't protrude from the back panel when not in use, which should help loads with using the device as a phone.

There's also a Xenon flash and the leather-like texture on the back, which is a nice step up from the unimaginative and rather smudgy gloss of old. The inscription on the lens also confirms the 10x zoom covering the 24-240mm range in 35mm equivalent. There's much else but the source does stick to the 20 MP resolution.

Wow....Sure...Saying you owned some Samsung camera 13 years ago and then got a better cannon is totally and excuse for your original non factual comment and now this rude negating non factual one... Congrats on troll abilities.

I don't comment stuff without basis unlike some people here. I owned a Samsung Digimax (Was called back then) way back 2001-2003, and I never knew image quality can be better until I owned a Canon IXUS/IXY in 2004.