TENAA listing confirms most of the OnePlus 6's specs

A TENAA listing for the OnePlus 6 was just published and as is the tradition with the Chinese authority it confirmed most of the specs of the yet-to-be-announced smartphone. The phone itself is coming on May 16, but now we have a pretty good idea of what to expect. 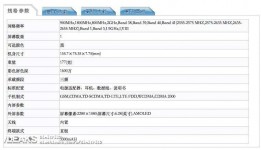 TENAA confirms the latest Snapdragon 845 with 4x 2.7 GHz Kryo 385 Gold and 4x 1.7 GHz Kryo Silver cores is behind the wheel paired with Adreno 630 GPU and at least 6GB of RAM for the standard version and 8GB for the upgraded variant. You get either 64 or 128GB of internal storage.

As expected, the display will be 6.28" in size with 1080x2280 pixel resolution, which means 19:9 aspect ratio and just like its predecessor, it will sport an AMOLED panel, or as OnePlus likes to call it - Optic AMOLED.

Try to learn English, I'm not talking about all previous OnePlus models, I said previous models OnePlus 5 and OnePlus 5T has OIS, so it's safe to assume that OnePlus 6 will also have OIS