It looks like the US version of the Samsung Galaxy Note is about to get some competition in the phoneblet realm in the immediate future. LG's answer to the Note - the Opitmus Vu has been caught in a series of spy shots, sporting Verizon Wireless livery. 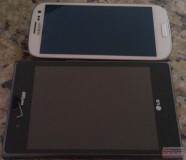 As you can notice in the photos above, the handset will run Android 4.0.4 Ice Cream Sandwich when it gets unveiled. The rest of the its specs are the same as in the LG Optimus Vu, which we recently reviewed.

Launch date and pricing of the Verizon Wireless flavored LG Optimus Vu are yet to be announced. We doubt it will be a long wait though.

"beauty lies in the eyes of beholder", if you see things ugly, need to correct vision first...