The Acer Liquid E3 packs a 4.7" 720p IPS display and runs on a quad-core 1.2GHz processor coupled with 1GB of RAM. There is no info on the CPU architecture, but Cortex-A7 seems like a safe bet. The rest of the specs include 4GB of expandable storage, Wi-Fi and GPS. There is also this Acer RAPID key at the back of the device, which can answer calls, launch the camera or unlock the phone with just one press. 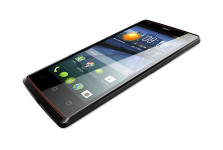 The Liquid E3 has very interesting camera department. Acer has equipped the device with a 13MP main snapper at the back and a LED flash. The manufacturer promises "ultra-fast" focus time. The front snapper is 2MP, also accompanied by a LED flash for better selfies. Now that's a first!

The smartphone is running on Android 4.2.2 Jelly Bean, but Acer promises an update to KitKat shortly after launch.

Acer Liquid E3 is scheduled to hit the shelves in Europe this April on €199.

The Acer Liquid Z4 is an entry-level droid featuring a 4.0" TFT screen (the screen aspect suggest WVGA) and powered by a dual-core 1.3GHz processor (again we are going to bet on Cortex-A7). There is also a 5MP snapper with a LED flash and 4GB expandable storage.

Acer Liquid Z4 is also relying on Android 4.2.2 Jelly Bean though no upgrade plans was shared. Acer will be pre-loading its own launcher, which is going to offer four different UI modes (Basic, Easy, Classic and Keypad) for better experience.

Even though there is nothing official, a closer inspection on the official pictures suggests the Liquid Z4 might also come with the Acer RAPID key we've mentioned above.

Liquid Z4 will hit the EU markets in April and will cost €99. You will be able to choose between Essential White and Titanic Black flavors.

Those two smartphones will premiere at the MWC in Barcelona in a few days. Another Liquid smartphone that was recently teased is expected to go official in Barcelona too. We will be on spot covering everything for you.

Guise you should look also cost of the device. In Comparison of the cost its may better than you.

Here in the Philippines, we already havr phones with front flash. Nothing new on that.