Out of the blue

Acer CloudMobile S500 review: Out of the blue

The Acer CloudMobile S500 retail package is identical to those of its mid-range peers. It covers the basics but fails to add any extras. There is a comfortable headset with rather flimsy music playback controls, a two-piece charger and a USB cable. The rest is a pile of papers that you wouldn’t bother reading anyway.

On the positive side, the smartphone weighs just 122g, so it's perfectly pocketable.

Acer has been using a similar design on all of its recent smartphones and the CloudMobile is no exception. The curves top and bottom align nicely with the ones at the back panel and the overall look of the smartphone is pretty decent. It slightly reminds us of the good old Sony Ericsson Vivaz.

The choice of materials is decent - despite the all-plastic build, the CloudMobile S500 feels quite solid. Design-wise, we find the extra bezel below the screen somewhat unnecessary. The the CloudMobile only has on-screen keys for UI navigation, but it still has a huge chunk of a bezel at the bottom, which is somewhat annoying.

If there was no way for Acer to avoid this bezel, it should have at least stuck with hardware keys and allow you to use the full screen resolution for the UI.

The front of the device is covered with glass. The frame around the screen is sloped inwards and is slightly elevated so you feel when you’ve reached the edge.

We especially like the back, which feels similar to the Nexus 7 tablet's back panel. Thanks to the soft rubbery feel, the Acer CloudMobile S500 feels great in the hands and won’t slip easily out of grip.

Above the 4.3” display there is the earpiece, the 720p front-facing camera, a proximity sensor and ambient light sensor for automatic brightness adjustment. Below the screen you get nothing but the Acer logo. The home, back and multitasking buttons are virtual and placed on the screen itself.

The volume rocker is a single-piece plastic with prominent tactile bumps on each end so you can easily find the + and - without looking. The sides of the phone are made of nicely rubberized plastic, which feels nicely grippy.

On the right side

The left side holds the micro USB port. Here you can also find the tiny gap where you have to insert your nail to open the back panel.

The micro USB port on the left

The top of the Acer CloudMobile S500 is where the 3.5 mm headphones jack lies along with the power/ screen lock button. We like its feedback and the fact that it’s slightly elevated, which makes it easier to find when you are not looking.

The top of the phone

The primary microphone pinhole lies on the bottom of the Acer S500.

The main mic on the bottom

The back panel has a dotted texture surface and is the part with the most pronounced rubbery feel. The Acer logo is placed in the center and above it is the elevated, embedded 8 MP camera lens with a single LED flash. The secondary noise-suppressing microphone is placed on the left of the camera.

Near the bottom of the back panel lies the loudspeaker, under a Dolby Mobile-branded aluminum-made grille.

On the back side

Removing the battery cover is rather tricky at first. It feels like you’re ripping it open and that you’re bound to break something in the process. But as we found out it just feels that way, the plastic is sturdy enough.

Under the panel lies the lowly, but user- replaceable 1460 mAh li-Ion battery, the microSD card slot and the SIM slot.

The Acer CloudMobile S500 has a 30 hour endurance rating - if you do an hour of calling, an hour of video playback and 1 hour of browsing you'll need to recharge the phone every 30 hours. 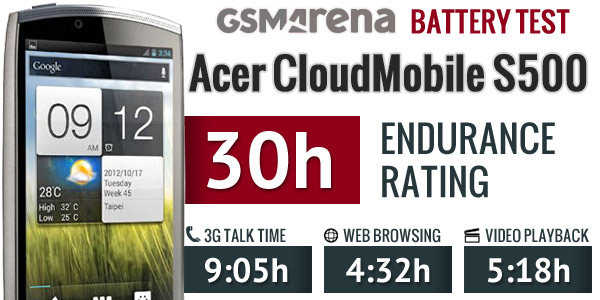 The NFC board is stuck to the back panel.

What's under the hood