Acer CloudMobile wins an award before its actual announcement

Acer has found a curious way to create buzz around its upcoming CloudMobile Android smartphone. The yet to be announced handset has just won an iF design award for it looks. 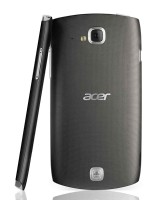 We know little about the device's specs at this point. The Acer CloudMobile is said to feature a 4.3" HD screen, Dolby sound, and a body less than 10mm thick.

On the software side, the Acer CloudMobile is said to run Android 4.0 Ice Cream Sandwich out of the box. The device will also be the first to implement Acer's own cloud technology.

Expect to see Acer CloudMobile get unveiled at MWC later this month with retail availability scheduled for Q3 this year.

If SOPA we're to pass, wouldn't this phone be extremely limited? I guess the future is all about cloud technology.

you in denial bro... Samsung does not have a quality and design dept.

Disagree with you, it's really beautiful and stylish. Does not look like someone anna phone today. In addition, the 4.3 "display with 720p resolution. Well done, Acer.