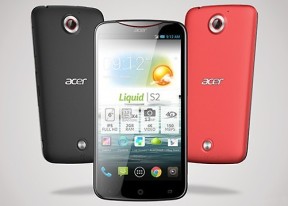 The Acer Liquid S2 runs on Android 4.2.2 Jelly Bean with Acer's custom Float UI on top. Our prerelease model still had its fair share of bugs, but you can really feel the Snapdragon 800 kick regardless.

Here's a quick booth demo video which shows off the main features of the Android UI, including Acer's take on floating widgets, and the camera UI.

The real star of the show when talking about the Acer Liquid S2 is the 13MP camera, capable of 4K UHD video recording. The fps is limited to 24 fps, but obviously the resolution the device shoots in is unmatched.

There is obviously a fair amount of shakiness that will hopefully be smoothed out in the finalized software.

There's also a 2MP front-facing camera on the Liquid S2. Its primary purpose is videoconferencing, although you'll likely use it for taking selfies at parties more than anything.

Acer has for some time sailed under the radar when it comes to smartphones. The Liquid S2 pins them on the phablet map, and does so with a flourish. While the 4K UHD video shot by the Liquid S2 may not wind up being the best around, particularly if it struggles to maintain 24fps, it is still the only smartphone that can make such a claim. And with an expected October release date, it'll be one of the first 4K smartphones in buyers' hands.

One major obstacle the phablet faces, however, will be its anticipated high launch price, which makes it bound to face some serious competition. But even though the Liquid S2 may have trouble getting serious market traction, it will certainly do well to herald the emergence of a new strong player in the high-end.