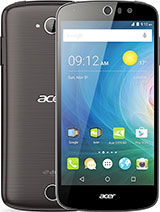 can you please unlock my sim 1

Hi,
2G mobile data on airtel is not working.
How to change it to 2g

Mark, 24 Apr 2016How can i Fix this problem Z530 system UI has stopped tnxtry to restore factory

guys u dnt get i phone for rs.7000
so its the best one under the budget

Since day 1 I've been having problems with this phone.
Lagging a LOT, camera doesn't function well, front camera has pixels all over it, no memory at all ( losing my contacts like every week), added a SD card, but now it's even lagging more, even when I shut down al the apps.
4G is rather slow, battery doesn't even last a day and I'm not that much on my phone.
I was really pleased when I had a laptop from Acer, but this phone really sucks.

How bad is this phone? Users please comment on the pros and cons of this new phone,thank you all

Good day!!!i just want to share my on opinion regarding with this acer z530. This is the worst phone ever i have. I had this phone from my sun postpaid plan. Heating problem the phone suddenly shut down when its very hot. Contact number save on your phone book sometimes doesn't show name. The worst is its very laggy.......it always hangs even i close all running application. Data connection very slow.....The good thing only is the battery its it doesn't drain easily. If you want to buy a phone buy a nice one not this acer z530. Ths is the first time i post a comment based on this phone. Over all rating FAILED.

Anonymous, 02 Apr 2016My Acer z530 can't detect SD card. I have tried 2 SD card both are not working on my Acer Z53... moreIt mY be detecting the SD card, however Acer released a update on December that too saY the ability to move app or data to the SD card.

They have put out a update to fix it but it hasn't hit Canada or the US yet.

My camera doesnt function! Just bought it yesterday! Somebody tell me what to do with this? Thanks

tricken, 01 Apr 2016my phone acer Z530 is heat while using my data or wifi. whats happen this phone ?! most of the phone is like that when youre using it like a PlayStation.

My Acer z530 can't detect SD card. I have tried 2 SD card both are not working on my Acer Z530. However, those SD card are working on a different mobile phone. Is it possible that ACER SD card slot is broken or faulty?

my phone acer Z530 is heat while using my data or wifi. whats happen this phone ?!

I have heating problems when connected to data (3G or LTE). When charging during heavy use, it does not charge but drains instead. I have to pullout the charger and plug again before it charges very slowly. Other than these problems, everything else are very good.

Anonymous, 20 Mar 2016had this over a month had few problems had to do factory reset twice now new problem !!:can't ... moreur just 2 newb 2 use a smartphone.