We are already familiar with E130, since it was recently showcased at Computex 2010. 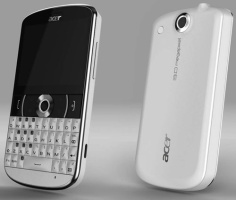 Both beTouch devices run on Android OS v1.6 Donut and will feature additional software such as Acer Spinlets (for accessing or sharing media content) and UrFooz (for social networking).

Both phones will be released in Q3 this year in black and white versions. Acer beTouch E120 will hit the shelves in mid-July, while its QWERTY sibling E130 is expected in August. There is no word on pricing yet.