Acer has introduced two new Android Froyo smartphones on CES - Liquid Mini and beTouch E210. The first one is a smaller version of the previous Liquid model, while the new beTouch is a QWERTY touch-bar.

Liquid Mini has a slightly smaller screen than its predecessors - a 3.2-inch capacitive one with HVGA resolution. The rest of the specs include a 600MHz Qualcomm processor, 512MB RAM, 512MB ROM, 5 megapixel camera and the usual connectivity package (3G, Wi-Fi, GPS, FM radio).

The Liquid Mini is expected to hit the shelves in April, but there is no info on the pricing yet. 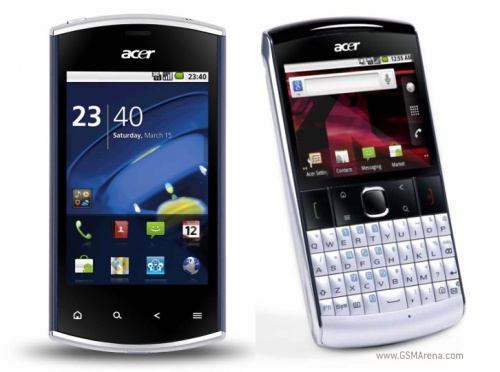 Acer beTouch E210 is also well connected with 3G, Wi-Fi, GPS, Bluetooth and FM radio. It's expected in March, the price is yet to be announced.

The E210 has specs that are similar to RIM's Blackberry 9000. People in the Blackberry community often refer to the 9000 as the "Cadillac" of the Blackberry line up. For a company that remained under the radar for the most part to instantly...

needs to be priced against orange SF for it to be successful?