After being the most popular Windows Phone device for almost 3 years, the Lumia 520 has finally been dethroned. According to latest data from market research firm AdDuplex, the Lumia 535 has now claimed the top spot. 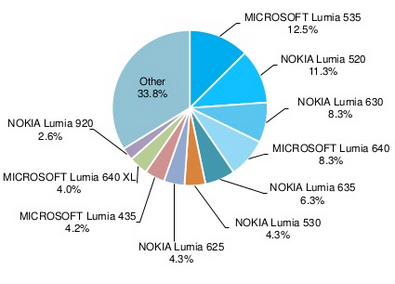 The report also revealed some other interesting statistics. For example, Microsoft manufacturers over 97% of WP devices now, with around 80% of them running Windows Phone 8.1. Windows 10 Mobile currently accounts for less than 10% of the total.

The Lumia 640 is the top WP device in the US, while Lumia 535 tops the chart in the UK and India. For more information, head to the Source link below.

i dont know how this lumia 535 is the most popular in lumia lineup it has touch screen problem not the softwear bug its a manufacturing fault i use nokia lumia 620 sevral years ago its a very good touch screen lumia is best for use till the name noki...