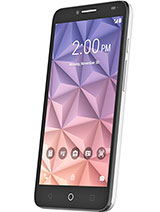 This phone has a big screen which is great for watching videos. The camera is not the best, definitely not good for use at night. I got my phone in May 2016 with a one year warranty. When I got it, the sound sucked when recording video. It sounded distant and muffled. Sometimes when I'm using it, the phone will freeze for a minute or two and I'll have to restart it. Flash Forward December 2016 and one night my phone flashes a completely blue screen and then blacks out. Besides the charging light that comes on when I plug it in, it is completely unresponsive. I tried soft resetting (didnt work), called Alcatel manufacturer and the rep even walked me through a phone resetting process. Still nothing. I have to send my phone in for them to repair it. When they do they will wipe clean all of my data on my phone :( So I decided to upgrade to the ZTE Zmax Pro (I'm still having Alcatel fix it though). I feel this is a good first phone someone 15 and below.

Jim, 21 Oct 2016Does anybody know how to boost the audio volume on the new fierce 4???Can't conectell to WiFi or Bluetooth

Like T-Mobile (its parent company) and Deutsch Telekom, MetroPCS f*****g SUCKS! I have this handset, but cannot tell if it is as great as everybody thinks it is because I do NOT reside within five miles of an Interstate highway or within five miles of a major city......so my signal reception is a NIGHTMARE (even though the region that I live in is as flat as a pancake).

If you are NOT on an Interstate nor in a major city, do yourself a favour and spend the extra few dollars it costs to go with somebody like Verizon who features complete coverage!!!

dumdum1, 25 Aug 2016It's not as easy as that. Google blocks the factory reset on this phone. I hate it when peo... moreNice phone for the price. Big screen which is nice and to answer someones question, it is very easy to bypass the google account verification using quick shortcut maker apk

Does anybody know how to boost the audio volume on the new fierce 4???

Jb, 24 Apr 2016How to do a soft reset?soft reset:
 Press and hold power and volume up until you see the Alcatel Start up screen.
 Let go of the power button but do not let go of the volume up yet until you see the android recovery screen.
use the volume down to select the option REBOOT SYSTEM NOW
 Press power button to Select it
HOPE IT WORKS !!!!

AnonD-481167, 27 Dec 2015Some people just like to complain. I got mine for $69 out of pocket after instant rebate and i... moreHELLO! Yes. I had so many problems with streaming music and other things on many other phones. Flawless on this phone.

Wayne, 27 Jan 2016Bought two of these phones from Metro PCS, one for my girlfriend and myself. Absolutely love t... moreYes. The radio is a nice feature...some of us actually still listen to the radio...

Boy, we have some real cranks on here. I had tons of lousy phones from Virgin Mobile and switched to Metro PCS with this phone...not a single problem after a week. Have yet to test out the memory card with a 64 gig or higher card.

Sbudeng, 11 Feb 20161. Firstly, use the Power key in order to switch off the cell phone. 2. Afterwards press and... moreIt's not as easy as that. Google blocks the factory reset on this phone.

I hate it when people who have a weak grasp of android devices think they have the answer to everything.

Katcr2000, 07 Jun 2016The phone does everything I have asked it to. Fast quad core and big screen does keep up. I w... moreI have used 64 gb and 256gb sdxc (class 10) cards with zero issue. I think Alcatel just quoted 32 gb because that's the max for SD, sdhc (in any class) . That way customers who don't know the different types of SD cards can just buy any old card up to 32 gb and not need to know the different classes or types. But the phone will read any size sdxc card.

The specs say that the memory is expandable up to 32 GB but I have a 64 GB SD card and am using it without issue. These specs can't be correct, not completely at least.

SoNic67, 24 Jul 2016This is a very nice cheap phone. Unlocked after 90 days from MetroPCS. Rooted with Kingroot.... more
I'm not sure how long it will take your phone , because what you've done to root the phone is only a trap that opens the phone's software to work better but at the same time becomes subject to the infection, and the program that created by Chinese hackers , destroying more than 500,000 product annually. I wish you luck , but remember at the first sign when the phone starts to do things by himself , then immediately install (CM security) because if for a short time does not clean up infection from your phone then the first restsrt phone will become worthless brick

To the people complaining about battery life, I just wanted to say I was shocked when I saw the battery was only 2500mAh. I have experienced stellar battery performance with this phone. I am a pretty active user and still get more than 24 hours of use per charge on average.

I'm currently looking to upgrade the phone due to lack of a gyroscope, but otherwise I'm extremely happy with the phone and for $100 it's a great value in my opinion. The only other negative I could point out is the screen resolution, which is only 720p, but it is still a great looking display for most purposes.

Anyone in the market for a budget Android smartphone should consider the Fierce XL. I think it will surprise a lot of people.

This is a very nice cheap phone.
Unlocked after 90 days from MetroPCS. Rooted with Kingroot. Now it works with Cricket Wireless (AT&T network, better coverage inside the buildings where I work).
Added LTE band 5 (see XDA Developers) just to enhance compatibility with AT&T (band disabled in the modem by MetroPCS/T-Mobile, but it was FCC approved for this phone).
Smooth working, accepted a 64GB memory card, the only drawback is the small battery size (life). Oh, well... keep a charger in the car and at work.

Katcr2000, 07 Jun 2016The phone does everything I have asked it to. Fast quad core and big screen does keep up. I w... moreI have actually installed a 500gb card in my Alcatel fierce works great got it off wish app works flawless

Mary, 25 Jun 2016Worse phone I ever had. The manual would fit in a baby's hnd and it is difficult to operate ... moreif you need a manual to operate with android phone , then the problem is in you,
but do not canceling, only works on it and ask for what you need for help , menu is almost the same for all (Android 5.1) phones with small changes. greeting

Bought this phone without researchin on it. ported my number 2 MetroPCS & sales girl said 2 phones were on sale 4 $9.00. So, I switched from Boost 2 them. She said the phone's memory slot can hold upwards of 128GB;don't know. Currently have 8GB of Internal space. I use Apowersoft 2 backup all my installed Apps 2 PC. Will get rid of all Bloatware;yes, there R a ton of them. Wuz attracted 2 this model as my S4 got stolen & the screen is 1/2 inch bigger. Works great, no complaints. Except: can't find settings 2 adjust sensitivity of the touchscreen as my ear turns on other apps, especially my data usage & sometimes I accidentally hangup the phone that way as well. The other 1 is that the volume is low even with speakerphone while receiving calls. Works fine with headphones. Tried several volume boosters, none have increased the volume. The S4 always gave me a warning if I turned the volume up 2 loud;this 1, no dice. Great phone ferr $9.00 & no contract!

AnonD-536982, 13 May 2016DO NOT BUY THIS PHONE!! I have to charge the battery everyday because it's a piece of garba... moreFor the auto answer issue you have to factory reset it