Just a day after an alleged render of Alcatel's Idol 4 Pro smartphone (shown below) leaked online, the Windows 10-powered device has been spotted on GFXBench, revealing some of its previously-unknown key specs.

The listing reveals that the handset sports a 6-inch display, and features a 20MP rear and 9MP front camera. RAM is listed as 2GB, although we think it should be more than that (3 or 4GB considering it's a high-end device). Internal memory should be 64GB. 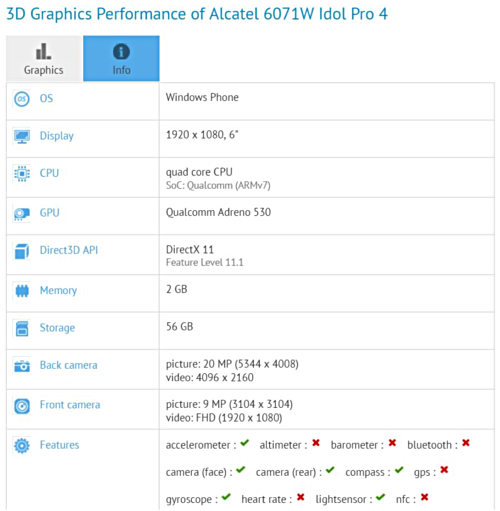 Other specs, such as 1080p display resolution and Snapdragon 820 SoC have been mentioned in some earlier rumors as well. Aside from these, the Idol 4 Pro is said to be powered by Windows 10 Mobile, and is also rumored to support Continuum.

Yep. It is likely to resemble the 4s. Probably 5.5". If it is an 820 SOC then it will most likely have 4GB of RAM. But to use all of it it will probably runt the anniversary version of W10M which is suppose to support 64bit. Might see this phone in...

Really? the fact that its a smartphone is the only similarity