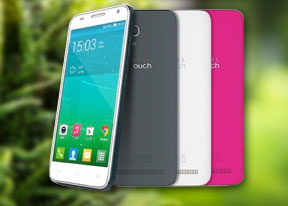 The Idol 2 Mini S is the 4G LTE version of the Idol 2 Mini and features an identical 4.5" qHD display, 1.2GHz quad-core CPU, 1GB of RAM and an 8MP rear camera with LED flash and NFC.

The difference isn't just the LTE connectivity, though. The Idol 2 Mini S packs a metal back with plastic top and bottom. It's a very good looking combo as the plastic is by no means the low-quality stuff cheap phones are made of. It's semi-matte and, just like on the Idol 2, could easily be mistaken for brushed metal.

The similarities to the Idol 2 continue on the build quality as both phones are equally well put together. There's no squeaking and bending and the phone is just 8.5 thick. Astonishingly, despite its semi-metal body, it weighs just 116 grams.

The Idol 2 Mini S features a microSD card slot and runs Android 4.3 Jelly Bean, with an update to KitKat in the works.

Alcatel prices the Idol 2 Mini S at €209. We'll be sure to give the phone a very close look some time in March when it launches.