The Alcatel One Touch Hero measures 158.5 x 80.6 x 8.5 mm, which is 7mm taller than a Galaxy Note 3, at nearly the same width and thickness. What you get is an extra 0.3" of screen diagonal. Compared to other 6-inchers, it's smaller in all dimensions than a Lumia 1520, for example.

While the One Touch Hero isn't a small device, the slim bezels keep it usable (if not entirely comfortable) with one hand. At just under 180g of weight, it's not unpleasant to hold for longer periods either.

Alcatel went very minimal with the design of the One Touch Hero. Its front is not too different from the Nexus 5, while the back is vaguely reminiscent of the HTC One X. With very few design accents, similarities are unavoidable and this should be taken as a compliment rather than a dig at the Hero.

The large screen dictates the size and shape of the device, and Alcatel did a fine with the bezels. The bottom obviously had to accommodate the capacitive controls but other than that Alcatel did a bang-up job.

The back is made of a soft textured plastic not unlike the polycarbonate we've seen from Nokia and HTC. It's pleasant to the touch and hides fingerprints well, though it's hard to clean ones it gets smudgy.

It's not a unibody design, the back is clearly a separate panel yet it fits so tightly that it might as well be.

The rounded corners and beveled edges make it comfortable to hold in hand with no sharp corners digging into your palm. The weight of 177.6g is actually low for a 6" device, making the Hero easy to handle (unless you have small hands that is, but then you probably aren't looking at phablets anyway).

Alcatel One Touch Hero in the hand

A feature to note at the back is the row of pogo pins - those are for accessories, which use magnets to snap in place. We'll get back to those in a minute.

The Alcatel One Touch Hero features a 6" IPS LCD screen of 1080p resolution, for a pixel density of 376ppi. It features oleophobic coating but there's no mention of the type of protection glass used other than it's laminated.

The screen is sharp and with very good viewing angles (minor contrast shift at extreme angles). The colors are not the punchiest we've seen, but many people rail against the oversaturated look of AMOLEDs so this might be more to your taste. 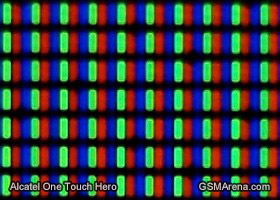 Alcatel One Touch Hero display matrix under a microscope

More importantly, the brightness is above average but not as high as other LCD-based phablets we've played with. The black levels are nothing to write home about, which lowers the contrast. The relatively low reflectivity of the laminated glass does help outdoor legibility though, which virtually as good as it was on the Galaxy Note II or an iPhone 5s.

The capacitive touch sensor can detect 5 touch points (screens commonly go up to 10, not that there's a practical difference). It's sensitive enough to detect even light touches with fingers, but it could have been a bit more receptive to the stylus.

Another negative we noticed is that the lower half of the screen exhibits some light bleed - that is the very edge of the screen is light stronger than the middle of the screen. It's barely noticeable most of the time, but you see it more often once you know it's there.