Having covered the screen, time to look at the rest of the front. Alcatel used the deprecated Back / Home / Menu arrangement for the capacitive keys, putting its own spin on them, similar to HTC.

The Back key can be long pressed to activate the Dual display (split-screen) multitasking feature. A long press on the Home button will launch Google Now instead of showing the list of recent apps. That's activated by long pressing the Menu key instead. This setup takes some time to get used to but is quite efficient once you have.

Above the screen is the earpiece and assorted sensors, plus a 2MP camera capable of shooting 1080p selfies.

The top side has just the 3.5mm audio jack, while the bottom side features the microUSB port, one of the microphones and the stylus compartment. The stylus sheaths into the Alcatel One Touch Hero, but can fit in only one direction.

Audio jack on top • microUSB, mic and stylus on the bottom

The stylus is 11cm long and around 5mm thick (it's slightly flattened). There's a rubber tip that works with the capacitive touchscreen, no digitizer magic here. The sensitivity is not as good as we would have liked and sometimes we had to push harder to make sure the screen doesn't lose track of it.

Still, it can improve the usability - swipe typing becomes more accurate and you can use handwriting recognition too (though that's slower than just swiping across the keyboard). Since it's a capacitive stylus, it works just well with the capacitive touch buttons below the screen (it took Samsung some time before it got this right with the S Pen).

Around the back, the main attraction is the 13MP camera accompanied by an LED flash and a microphone. Lower down is the loudspeaker grille, which has two small knobs on either side to keep it from getting muffled.

Under the back cover is a 3,400mAh battery, which is pretty good for the size of the Alcatel One Touch Hero (other 6" devices have similar capacities but with bigger bezels).

Also on the back is the row of pogo pins that we mentioned earlier. They are used for accessories, which just snap into place. That's done with eight magnets arranged on both sides of the phablet.

The basic accessory is the LED MagicFlip cover. It features an 8 x 11 matrix of white LEDs that can display the time, simple notification icons (e.g. missed call, new email) and equalizer bars that respond to the music. The LEDs are white only but can gradually fade to create a breathing light effect.

The LED MagicFlip cover and how it attaches to the back

The cover is held close by one of the column of magnets and we found they are enough to hold it securely in place. When you open it, and fold it so that its edge touches the back, the second column of magnets grabs it so it won't flip around as you use the phone.

The material the MagicFlip is made of isn't luxurious but it isn't unpleasant either.

Another version (so far, a prototype) replaces the LEDs with a 5" e-ink display, so the One Touch Hero can double as an ebook reader. In comparison, a Kindle or Nook e-reader has a 6" screen. Still, it would be a great way to turn the phablet in two-in one device. 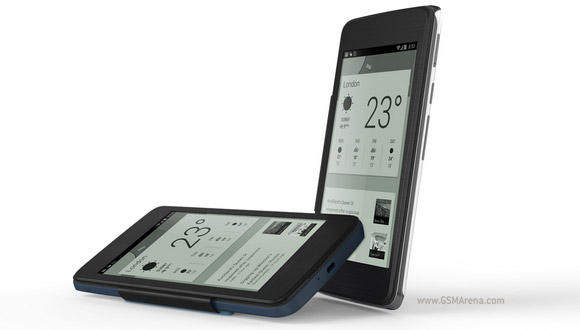 The accessories continue with a "wireless" charger. We put wireless in quotes since while it technically doesn't use wires to connect to the Hero, it's not like the Qi chargers of other devices. It's closer to Sony's magnetic docks - the magnets guide the phablet into place and the pogo pins take care of the charging. Which we suppose is better than the Qi chargers, most of which require you to manually align the device. 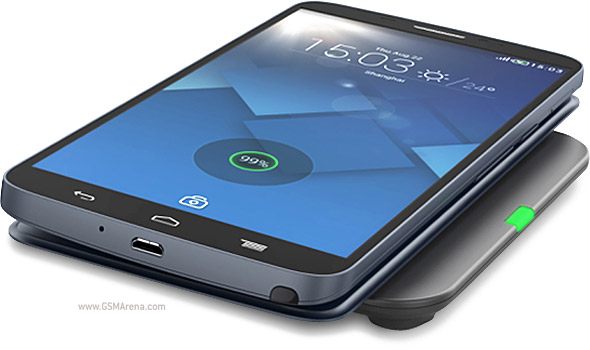 There's also an phone accessory with old-fashioned looks that's actually a Bluetooth headset aptly called the Sidekick. It's similar to the HTC Mini. Beyond receiving calls, it will also display notifications and control music playback. This makes it easier to pop the Hero into your backpack and take calls as you would with a smaller phone (with the Sidekick in your pocket).

If Alcatel has its way, the One Touch Hero can handle all your phone, phablet and ebook needs.

The company is also experimenting with a pico projector stand, which promises images of up to 70" in size and 12lm of brightness. The resolution is yet to be announced, but the brightness is on the low side for pico projectors - even the built-in projector in the second-generaion Galaxy Beam managed 15 lumens.

Note that the e-ink and projector stand are prototypes and it's not clear when (and if) they'll make it to market.

The Alcatel One Touch Hero packs a 3,400mAh battery, which is par for the course when it comes to phablets. We tested the dual-SIM version of the device and it posted an excellent talk time of 25 hours and while the dual-standby feature put some strain on the battery, the phablet is good for two days of moderate usage. The web browsing time is very good for a mid-range 1080p device too, the video playback time not so much. 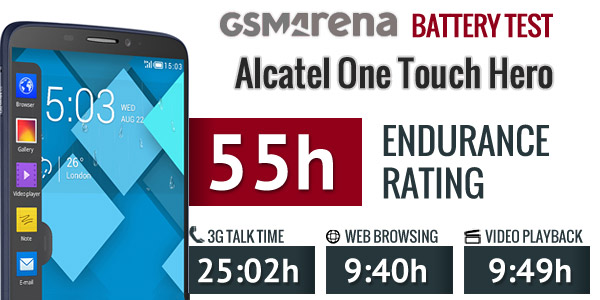