Many, many months after it was announced at CES, the Alcatel OneTouch Watch is now official for the Indian market too. It will be exclusively sold by Flipkart, priced at INR 7,999 (that's $120 or 106). Interestingly, the pricing is more aggressive in India than in the US, where the recommended value is $149.99. That's not a situation we see often in the mobile world.

The Alcatel OneTouch Watch doesn't run Android Wear as you might expect. Instead it's powered by a different solution developed by Alcatel for it. It does however work with both Android smartphones as well as iPhones, through dedicated apps. 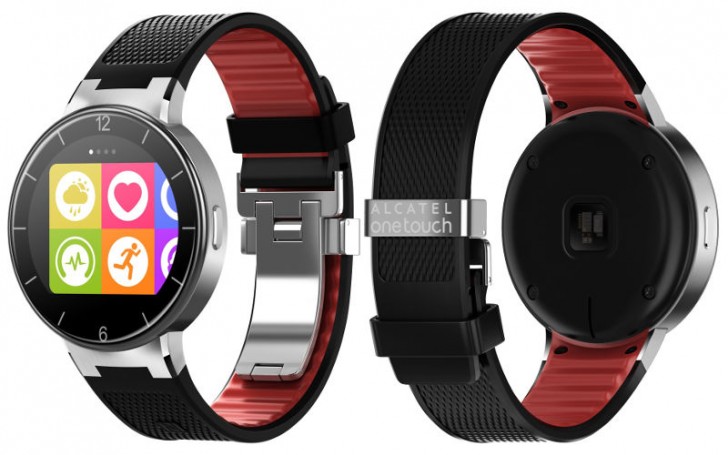 The smartwatch has a 1.22-inch 240x240 touchscreen with oleophobic coating, it's powered by the STM429 chipset, and it's got a 210 mAh battery. Also in tow is Bluetooth 4.0 support, and it has an IP67 rating for water and dust resistance.

Sensor-wise you get an accelerometer, an altimeter, a gyro, an e-compass, as well as a heart rate monitor. It's compatible with devices running Android 4.3 or newer and iOS 7 or later. It's 10.5mm thick, and the watch face has a diameter of 41.8mm.

You'll be able to buy the Alcatel OneTouch Watch in either "sporty dark red" or "volcano black and white".

I like the Design, it looks Nice and the Price here in India is good, IP67 is neat, but as its not Android Wear, I will need to try/test it before ordering to see I like the software?

Its actually one of the best looking smart watches out right now. Haters gonna hate...

This flat tire bezel design is thicker than moto 360. Definitely ugly french watch. Alcatel never design anything decent. The circular black bezel very deceiving with numbering on it. Online shoppers, don't be fool by this. That is just the bezel.