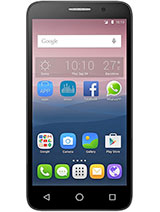 I wouldn't recommend this phone. You cant move/install apps to memory card, simply because there is no option for it in the settings and 3 gb of local storage for user to use is not enough for much anything.

I have the Alcatel one touch 5056 in my opinion it is the slowest phone I've ever had. I regret purchasing it.

Iv had the Pop 3 for a whyl now .soo far its been a good performer. However i only have 2 concerns with it.
1. The "running apps" button, the square one, i was hopping that it would function as an option button when u press and hold it and an options panel would pop out, just lyk with the samsung s5. Tried searching the setting, but found nothing. Its there a solution to this?
2. I bought an OTG flash drive recently but when i tried plugging it on te Pop 3 , nothing happend. But when i tried it with samsung phones, the otg worked perfectly. Does the POp 3 not have OTG compatibility? If not, is there a way fot it to be compatible? Like apps or rooting?
Thanks in advance!:)

Vietnamese language I need someone to help me with

Walter, 27 Aug 2016When I transfer songs from my computer to this phone they don't play. The wma files show up i... moreDownload mx Player and wma files will play

AnonD-583054, 10 Sep 2016Has anyone dealt and fixed the problem of a black screen, and the phone not working at all.Wit... more1. remove battery put it back and restart the phone.
2. if wont start normaly then pres power button for more than 7 sec,
3. and finally hold down the volume up key and pres power key at same time until the screen lights up to boot device with recovery mode and with volume up \ down key ,select ''factory data reset''.
If nothing helps , then ask for help in service for phones

Has anyone dealt and fixed the problem of a black screen, and the phone not working at all.With the alcatel pop 3(5) version? My sisters had this pop 3(5) phone for some time now, and early today she ran into this problem.I've been reading about this problem and the solutions to it, but in other phones. Will the vids on youtube about the black screen fix work on this phone?

Im using this phone for 10 months. Super good at performance. Don't heat much unlike other leading phones. But the primary cam is kinda blurry or bad as longer i use it. Front cam is never bad. Totally love it for a cheap price. Also i played pokemon go always says gps not found. Never lags simple and handy.

Walter, 27 Aug 2016When I transfer songs from my computer to this phone they don't play. The wma files show up i... more''windows media files '' need to convert to ''mp3 files''
that could be played on the phone

When I transfer songs from my computer to this phone they don't play. The wma files show up in file manager of phone but no play?

Paul, 22 Aug 2016How do we set up video call for this phone?video call settings;
go to settings, call settings, video call,and mark all except , auto drop back.
to make a video call you need to thurn on data connection, then in people select one number
which is also linked to data connection , and then open the selected number of contacts,, now you see next to the number 3 icons with 3 possibilities ''telephone handset for ordinary telephone call'' , then a ''telephone handset with the image to the video call'' touch the icon and there you video call. and the end the icon is for messages .
if I've helped it is good to give thanks.

AnonD-573796, 18 Aug 2016true, I didn't know that so when I read here that it was 8 I thought I had some kind of a bad ... more
ok because you admitted to what I wrote I give you a useful advice;
use some tricks you could make your
battery that lasts longer, and live longer.
never let it go below 25 % and do not go above 95 %, cos, every li - ion battery has a limited number of charge cycles 500-1000 depends on the manufacturer ,because when it reaches 100 % , then the cycle is finished and counts, but the same and when he went below 25 % to keep it between 25 to 95% the cycle is not counted and prolongs battery life. need to know , that li- ion batteries do not like when completely empty and completely filled , so put the phone on the charger whenever you are able to , because it's good for the battery.

How do we set up video call for this phone?

pane, 10 Aug 2016 Comrade, internal memory of the phone is ; total 8GB and is divided to *4GB for android s... moretrue, I didn't know that so when I read here that it was 8 I thought I had some kind of a bad knock-off

I have the 4G Pop 5 8GB internal memory expandable to 32 GB. I bought a scandisk 23GB SD card to boost teh memory but cant seem to get an more than 1GB on it. Warnings pop up on teh phone as I near the 8GB full capacity internal memory. Is there anyone else with this problem? Is there a support line I can call about it?

Total of 120 user reviews and opinions for alcatel Pop 3 (5).
ADVERTISEMENTS