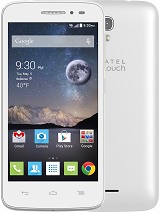 well guys i would like to know if the battery of this device how long i can be on social web sites ... cuz with moto g second generation i can aproxemetly just 9 hours as maximium ..

I got this through the T-Mobile offer. I can only get 480p video on the rear. Is this a mistake with GSMArena or is my phone being an jerk?

iwant to buy that alcatel mobile...

I wrote a review already,but i'll update. Now that its 3:40a.m. the internet speed is fast. It's what I thought 4g LTE would be I think when a company's plans become succesful again after they make changes like price restructuring, upgrades, then they get popular, and traffic gets too heavy. And then the success cycles continue taking turns. I am prolly still gonna return itthis phone cuz I am ever-hopeful of doing better speeds during the day with someone else. There are cellular unicorns for people on a budget aren't there? ... but they may be more like a chrysalus to a butterfly, doing seven generations of monarchs. Also ..Dont know why the first "14" was deleted on my review when I first said there is a 14-day return,

Just bought it tonight, $65 @ walmart and $25 for sim card. day return policy which I WILL USE. Great help from marketing phone sales rep/person at Walmart/Boulder HWY, whose customer service was superb, but... Surfing the web is soo slow. (It's t-mobile @ walmart.) SENSORLY's map of cell coverage shows it should be doing better than it is. (fyi: Apt complex, 6901 E lake Mead blv, Vegas) It will do 4G LTE, but even with plenty of bars, this is rid-onculus. Didbetter with the horrible last phone I had,and it had no 4G . That one was service paid to Virgin-- PC's well designed review of carriers (pub. 2014) said Virgin uses Sprints network. Sensorly coverage map on Sprint shows medium coverage for my block on Sprint 3G. Using chrome to surf on Alcatel One touch PopAstro, on a google search page, the site titles don't change the color to tell me I hav already visited. Keyboard doesnt always drop CAp shift back to lower case automatically all the time. It always drops to lower case after the first word of a sentence,but often after I type a proper noun like "Sensorly", I'm either shouting for a while or spend time erasing and retyping everything. Might be a fix, but sorry, Im not keeping it so wontbother to look for a fix. Walmarts 14 day return policy is very helpful. If camera needs to be real good for you, marketing ght want to try it first. I dontshoot pics.

Bad phone. The calls are not working from contact list. Speaker doesn't work, changes screens by itself, has it's own intelligence, hey... it was free from T-Mobil. Now I have to buy a real phone.

I have had a blackberry curve for many years and am very pleased, will I not have a pleasant experience switching to the Alcatel Astro ?

t mobile is giving these away is it worth getting?

WalterK, 22 Jun 2015T-Mobile is pushing this crappy phone as a part their "free" promo for people who ha... moreThis Alcatel one touch pop astro is a HORRIBLE and i do mean HORRIBLE Phone. It drop calls, the phone freezes, audio Sucks. I would not recommend this phone to anyone.

I have had this phone for a little while now. It runs very smoothly and I'm loving the LTE. While yes it isn't a spectacular item on the long list choices to pick from, I actually really like it. And this is coming from a phone junkie who goes through new phones every two months because I get bored easily. I don't see myself leaving this one. Only con I have with it is that the camera is perma focused. But I can deal with that. Great phone I think

T-Mobile is pushing this crappy phone as a part their "free" promo for people who had HSPA+ phones. It's a rolling promo in each market they upgrade to LTE. Alcatel makes all these through-away underwhelming phones that they don't ever update. Why would anyone want one of these second tier phones even for free?

The 4GB of ROM is puzzling. How can that be competitive? If they had gone with 8GB, they could have increased the price by 50% and sold a lot more. And, the Fierce 2 is a lot more expensive, and still only 4GB. This company needs to go back to cellphone device marketing school.

It is not a bad phone in my opinion. I have sold a couple of them when we first got it in. It has a smaller screen than the fierce 2. It has a quad-core processor and the price is under $70 for it new where I work. I have not seen them come back in yet. I may end up getting one when they come back in to play with. I use to have a fierce 2 and loved putting on Google Now launcher and Google camera on it. I am still decided if I will just buy a Samsung tablet to get my Android fix, or just keep buying cheap phones from time to time. I end up selling them overseas when I am done with them.

A reasonable phone for the lower end of the market..think i will give it a try.