Alcatel unveils the reversible OneTouch IDOL 3, two of them

Alcatel had its own way of grabbing people's attention at the MWC this year, and it was one we had never seen. The company released the OneTouch IDOL 3 which has the unique capability of being fully reversible.

We'll need to elaborate on that, obviously. What the company means is that you can pick up the phone and talk with the top side down. That solves a problem with symmetrical designs where you can't immediately tell which way is up. 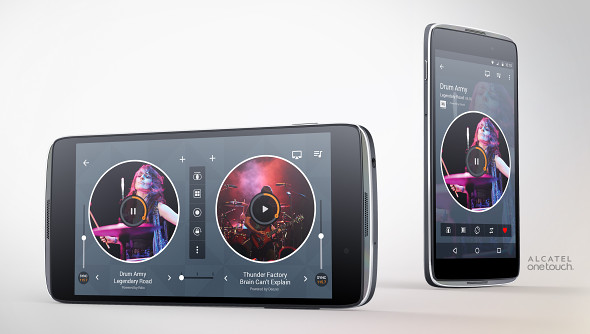 Less striking is the specsheet, but it's befitting the smartphone's price range.

The larger OneTouch IDOL 3 (5.5) is decidedly better equipped, and boasts a 5.5-inch Full HD IPS panel. Computing power comes from a Snapdragon 615 chipset with 64-bit octa-core processor, joined by 2GB of RAM and storage is either 16GB or 32GB.

Camera department is duly covered, with a 13MP main snapper behind an f2.0 lens and an 8MP wide-angle front unit. Dual front speakers should provide punchy sound, while the 2,910mAh battery is an impressive feat in the 7.7mm body.

The smaller OneTouch IDOL 3 (4.7) model takes hits in several departments, with the 4.7-inch 720p display being the most obvious one. A Snapdragon 410 chipset with a 1.2GHz quad-core processor will be powered by a 2000mAh battery. The selfie camera is downgraded to 5MP.

Alcatel is pricing the new IDOLs aggressively, with the 5.5-inch model costing €250, while the smaller 4.7-incher will hit the sheelves at €200.

kid, this phone has bigger battery, slimmer more premium body, with 1080p full hd screen which is far better than 720p screen and i'm pretty sure this phone has far better build compared to yureka, also it has dual front facing speakers and better f...

I think if we can compare it with Eureka Phone, price of Alcatel is too much high. It should be Rs.10000/- max as eureka phone available for Rs.9000/- with same specification

This is really a better model to buy with the latest techies. The cost of the Alcatel Idol 3 reads about 250Euro. This is quite high and impressive with the dual side speaker technology. techliveinfo.com/alcatel-onetouch-idol-3-smartphone-unveiled-...