Alcatel has been trailing behind Android A-listers as of late but today ventured boldly into the high-end with the One Touch Idol X. It's rocking a 5" 1080p screen with minimalist bezel - not unlike many of the current top-shelf Android offerings.

It has a quad-core processor of undisclosed origin, clocked at 1.2 GHz, as well as 16GB of inbuilt storage expandable via an SD card slot. A 2000mAh battery and a 13MP snapper are the other highlights of a package that runs, by the looks of it, a near stock version of Android 4.2 Jelly Bean. 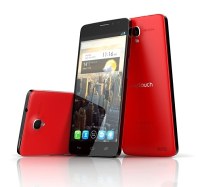 The Alcatel One Touch Idol X

There's still no actual word on pricing or availability but it may be bound for international release with US availability in question due to the apparent lack of LTE on board.

The One Touch Idol X will come in a variety of colors - blue, yellow and red for starters.

And while those three devices sound excellent on paper - the naming scheme is bound to cause confusion.

i cant use wifi what can i do??

Am looking to buy a phone but wondering how long will alcatel take to reveal their prices for one touch idol and phablet.

kindly message me how much is this phone