A new BlackBerry 10 smartphone has appeared in the wild. The unannounced entry-level handset allegedly belongs to the C-series, also known as the Cafe series.

The leaked smartphone, codenamed Americano, is rumored to sport a 4.2-inch LCD display with a resolution of 720 x 1280 pixels. The upcoming BlackBerry device is said to feature a Qualcomm Snapdragon 400 CPU and LTE connectivity. 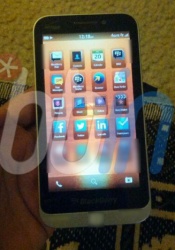 In the meantime, BlackBerry is having a tough run in the market, losing ground with an increasing pace. According to a recent report, the Canadian company will lose close to $1 billion by the end of Q2, 2014. The firm announced that it will lay off 4,500 employees to reduce its operating expenditures.

I'm looking forward to buying this phone as long as it is not overpriced. Let's hope BlackBerry gets some more market share..

i went to a Blackberry 10 conference before its release. it looked great, one thing that was said by the Blackberry team was that they had enough money in the bank to cover their overheads for 15 years. it means that if they made nothing for the t...

Umm, no. But keep thinking that if it makes sense to you