Alleged details on the battery life of Apple Watch leak

According to a report in 9to5Mac, the battery performance of the soon to be released Apple Watch will not blow users away. Cupertino is allegedly targeting 19 hours of mixed use for its highly anticipated wearable device. 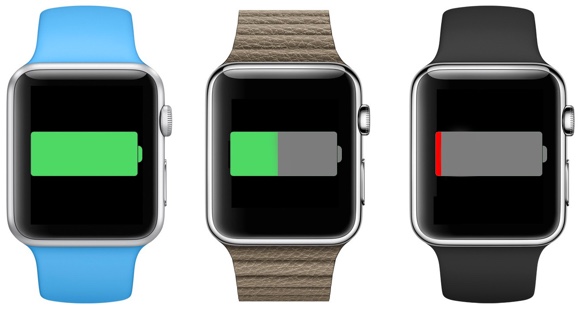 The active application use goal for the Apple Watch is tipped to range between 2.5 and 4 hours. Standby time target is three days, while sleeping mode should help the device last for four days.

The smartwatch will likely reach 2-3 days in standby or low-power mode though. The device’s fitness tracking software is targeted to render four hours of usage on a charge.

In timepiece mode with the screen and all animations on, Apple Watch will reportedly last about three hours. The manufacturer does not expect users to utilize the feature often.

The powerful hardware of the Apple Watch is unsurprisingly the main reason for its high power consumption. The S1 chip inside the product is said to be as powerful as the A5 solution in the current iPod Touch.

Apple is said to be extensively testing the wearable device. About 3,000 units are reportedly in circulation.

In true for to previous iPhone releases, the watch will have poor battery life compared to the competition but the fanboys will still buy it and state that Apple invented the technology. *facepalm*

of course it will sell milions, if youre an apple fanboy practicly you don't exist if you don't have it, but it will definitly not sell because it is good

No matter what it is it or how it is, it will still sell millions...