An alleged iPhone 11 Pro has popped up on Geekbench, sporting an Apple A13 Bionic hexa-core chip and iOS 13. What's more interesting is the listed 4GB of RAM, which would put the iPhone 11 Pro on the same level as the iPhone XS and way behind current Android opposition.

As Geekbench is a CPU benchmark, RAM wasn't an issue in the iPhone 11 Pro's decimation of all Android competition. The phone scored 5,472 in single-core and 13,769 in multi-core, which puts it head and shoulders above any smartphone.

In our fresh ASUS ROG Phone II review we put the Snapdragon 855+ chipset against Samsung's Exynos 9825 and they're not really close to the score posted by the Apple A13 Bionic. 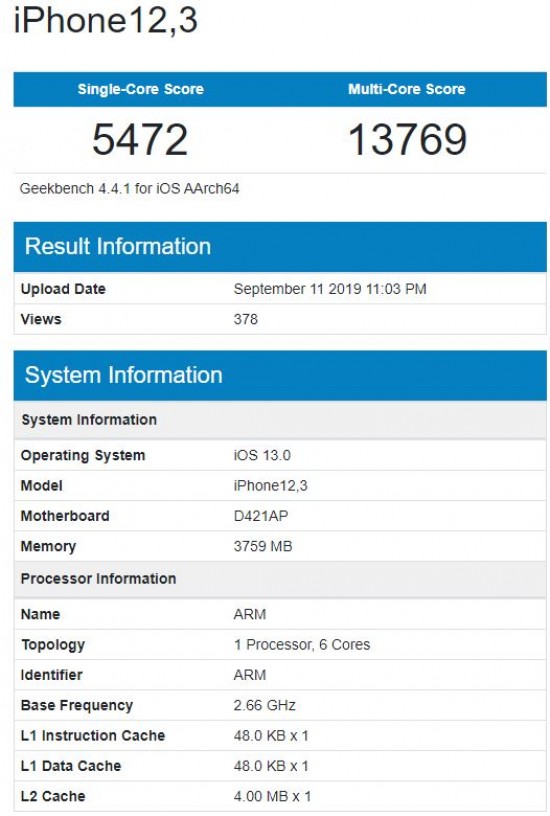 However, CPU performance is one thing, but RAM is another altogether. As a recent speed test proved, having more RAM ultimately means a phone can hang on to apps for longer - in this case the Galaxy Note10+ with its 12GB of RAM didn't reload a single app, while the iPhone XS Max needed to drop apps from its 4GB of RAM.

Regardless of how you personally feel they made factual points of lacking technology and design for charging the premium they are.

Most of them are personal issues. Design, headphone jack, 5G. I stay here in India, and massive 5g launch will take another 3 years to complete. Even so, the Wifi and 4G here is blazing fast. It may be bothersome for many I understand but I don't und...

That's simple. 1. Battery life. After 6-8 months an iPhone can't last a whole day without an extra charge. Perhaps with exception of Xr due to low screen resolution. 2. Connectivity. As long as Cupertino headquarters are sticking to their Intel m...