Alleged image of LG G3 posted on Twitter reveals that the upcoming Android powerhouse will be available with brushed metal finish. The photo was posted on the social network by @evleaks. 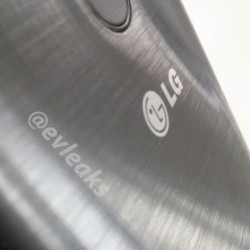 The leaked image comes with a message that the LG G3 will not be prone to fingerprints, thus addressing one of its predecessor’s shortcomings. The LG G2 as we noted in our review, is highly susceptible to smudges.

The leaked image does not mean that the LG G3 will sport brushed metal finish like the HTC One (M8). We expect the handset to be made of polycarbonate with the special treatment.

LG G3 has already appeared on a number of occasions. The smartphone will be officially unveiled later this month, on May 27 with 5.5” QHD display, Qualcomm Snapdragon 801 SoC, and 3,000 mAh battery.

Wouldn't mind the brushed metal look, even if polycarbonate will accommodate the wireless charging I now have with my Verizon G2. Use an Incipio feather case anyway.

Can't wait to See the New LG G3! I prefer the carbon fiber look and don't care for the smudges.It wipes easy.

Well just because LG doesn't spam the market with lots of ads to convince you that they are the best then doesn't mean they are worst. FYI is doing great. If you are caught inbetween the fame of a company and u caught by the band wagon effect, that's...