A new render appears of the Google Pixel, showing a couple of new things that we haven’t seen before. This render has the updated UI of the pixel launcher which was said to feature round buttons on the home screens.

A new difference that we now see is the lack of a front button or sensor that we’ve seen in some hardware leaks. This inconsistency (assuming these were actual renders of the Google Pixel) could suggest that the front sensor was a temporary sensor used for development or prototypes until the company was able to design it onto the back of the handset? 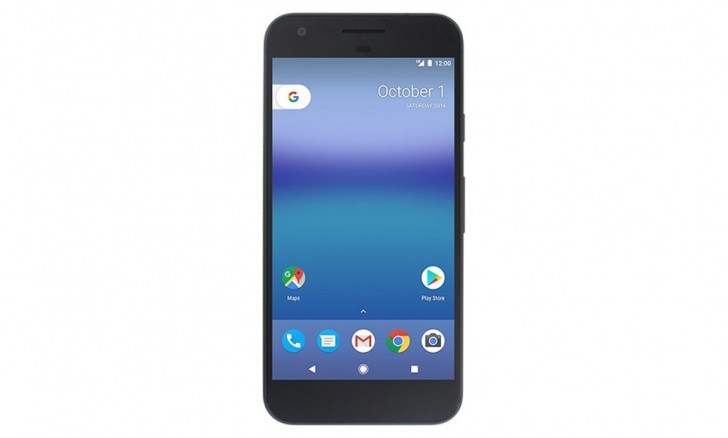 This is the only way we can explain the reason that some prototypes leaked with a rear fingerprint scanner as well as a blur on the front where a button or sensor could reside (this blur could have also been purposely put there to throw us off). In those leaks, the date on the homescreen in the larger phone shows January 6. Which could just be a way to throw off when the picture was actually taken.

In any case, we could be looking at the official render here, but as always, it should be taken with a grain of salt.

Whether or not we will see some kind of front mounted sensor or button below the screen isn’t entirely off the table. Besides this new speculation, nothing else about the expected specs has changed. Both the Pixel and Pixel XL are expected to have Snapdragon 821 CPUs, 4GB of RAM, USB-C ports, 12MP rear-facing camera and an 8MP front-facing camera, as well as Android’s sweetest release yet, Android Nougat 7.1.

The Pixel would feature a 5 inch 1080p display and 2,770mAh battery while the Pixel XL could feature a 5.5 inch QHD screen and a larger 3,450 mAh battery. Both phones are also rumored to carry an IP53 immersion protection certification.

The Pixel and Pixel XL are also said to start at $649 for the Pixel and will be announced at a Google event in San Fransisco along with a few other Google devices and gadgets like the Chromecast Ultra, Google Home assistant, as well as a Google Home Wi-Fi router.

So many generations later, Google still cannot get a phone design correct. Seems like they has to maintain those edges and keep making lookalike handsets.

Specs yes, pricing and design, no.

Those bezels are reminiscent of Sony lol