The previously leaked Nokia EOS made an appearance once again, flaunting its metal-clad body. This time around, the upcoming camera-centric Windows Phone smartphone got allegedly caught in front of the camera on what appears to be a production line under way. 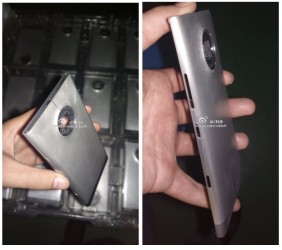 The leaked photos reveal the right side of the device, where (unsurprisingly) the volume rocker, power/lock key, and dedicated camera button reside. The back of the upcoming smartphone is also on display, thus revealing the opening for the camera tech.

Nokia is expected to take the wraps of the EOS at an event in New York City on July 11. Be sure to tune in for the full scoop on the newcomer.

Even though aluminum is cheaper than plastic, it still looks more beautiful and appealing than plastic. (=

Duh this is not the EOS.. EOS is made from polycarb.. This is the Nokia PHABLET which is made of aluminum.. Notice the camera circle does not house a xenon flash.. also the large size compared to 920

anyway nokia is losing. i want see a nokia with android full hd displays. qualcomm snapdragon 800 ,adreno 330 GPU and 2.3ghz processors and a comera of 41 megapixels pureview that. is a real smartphone that can be the definitive phone