The yet to be announced HTC M8 Eye appeared in an alleged press image. The previously leaked high-end handset is expected to debut next week, on October 8 alongside an action camera from HTC. 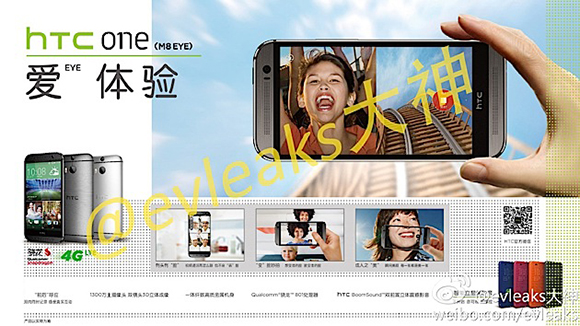 As you can see in the image above, HTC M8 Eye has the same design as the HTC One (M8) we know already. However, the newcomer will swap the underwhelming 4MP UltraPixel camera of the HTC One (M8) for a proper 13MP snapper (likely the same as in the HTC Butterfly 2). The secondary sensor for depth of field measuring will also be on board.

Camera aside, the specs of the HTC M8 Eye are tipped to be identical to those of the original. They include Snapdragon 801 chipset, 5” 1080p display, and Sense-d Android 4.4.4 KitKat.

Overall, the HTC M8 Eye brings back memories of the HTC One X+. Launched in October 2012, the latter addressed some of shortcomings of the original One X.

I completely agree with you. I love this phone. I have M8 and want to buy one more for my wife. I am waiting for M8 eye and wish the camera should be excellent. I hate any 5.5" inch screen. 5 inch is absolutely perfect for me.

I have the same exact feelings

I hope this proposed 13MP camera is of high quality that has a decent micron size to its sensor. we want higher detail but at the same time, a higher quality of image. if not 13MP, 8 or 9 with superb color accuracy,contrast and low light performance ...