Alleged press render of the upcoming Vivo X5 Pro made the rounds online. The upcoming smartphone from the Chinese manufacturer is expected to debut as early as this week, on April 28. 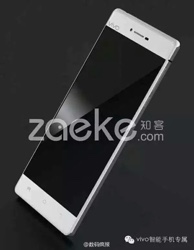 The leaked render falls in line with the teaser images of the handset that appeared over the past couple of weeks. Vivo X5 Pro will utilize a front glass with slightly rounded corners, which produce a 2.5D effect. The latter has been increasingly popular feature in smartphones lately.

apple shall survive as front runner -but by anather 2yrs - prices of best android smartphones shall drop dramatically -thanks to chinese manufacturers - this happened to laptops 15yrs ago .. and air travel 25yrs ago .. welcome market forces -consumer...