A new Samsung smartphone has been spotted in a benchmark listing. The GFXBench listing reveals the device carries the model number of SM-A730x, with reports saying that it's the Galaxy A7 (2018). 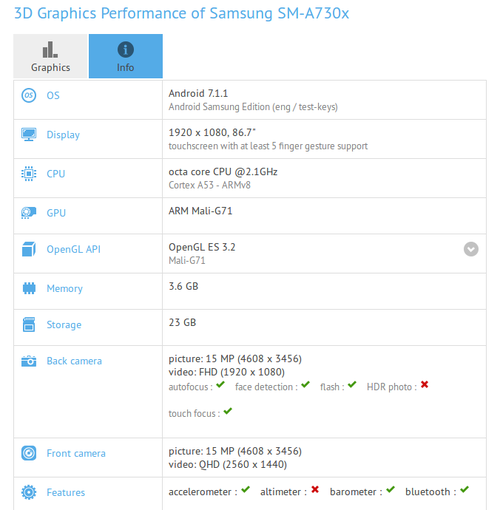 In terms of specs, the listing reveals the handset is powered by an SoC with octa-core 2.1GHz CPU, and sports a Full HD display. RAM is 4GB, while internal memory is 32GB. The device features a 16MP rear as well as front camera, and runs Android Nougat (version 7.1.1) out of the box.

better yet A9 pro (2018) I just got the one from last year and it's fantastic. Keep your awkward curved screen S and Notes... I'm loving the 5,000mA battery and super sized 6" screen. They should make a flag ship like this with 835 chi...