A new leak disputes an earlier one that claimed the Sony Xperia XZ3 will have a single 48MP camera. Instead, it will use the same dual camera module as the XZ2 Premium.

That’s a 19MP module with f/1.8 aperture and a 12MP module with f/1.6 aperture. There’s no zoom here, the fields of view are just too similar – 25mm and 22mm respectively. The 13MP selfie camera (f/2.0) sounds like it was lifted off the Premium model too.

Still, there are refinements beyond the camera. The base RAM amount was increased to 6GB (this was optional on the XZ2) and the Xperia XZ3 will grow a 128GB storage option. This particular unit is a dual-SIM device and there’s a microSD slot as well. 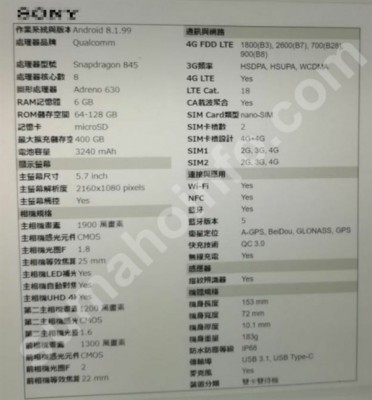 Further improvements include a slimmer body – 10.1mm, a millimeter less than the old model. The XZ3 is set to be slightly lighter too at 183g (down from 198g) and the battery capacity wasn’t harmed in the process. It’s listed as 3,240mAh, essentially the same as the old 3,180mAh battery.

There’s plenty of talk surrounding the Sony Xperia XZ3. It may launch before IFA (so, in less than a month), it may not be called “XZ3” (but instead start a new Xperia line) and so on.

It’s hard to say which rumor is more plausible. ANATEL has a good track record with battery capacities and it claims that the XZ3 will have a smaller battery. The name change seems unlikely too, Sony is barely 3 generations in. The camera, though, that sounds quite likely as it’s hardware that already ships on the XZ2 Premium.

Another oracle in our company.. here we go again.. Since you have this ability, please tell us who is going to win the world cup then? Oh.. wait...

Have you held one? I was amazed (and have owned a Z5). Didn't try the FP though (still believe the side one was as perfect as it can get)

You have answered your own question I believe