Amazon’s Echo Dot smart speaker was the best-selling product on the site over the holidays – and how could it not be when Amazon dropped the price to just $30 (from $50). It sold millions of units. Similarly, Google dropped the equivalent Home Mini speaker to $30 and gave away some to Pixel 2 buyers.

Both companies lost money on this – analysts at ABI Research estimate the Echo Dot costs $31 in parts alone, the Home Mini is $26. Add in shipping and other expenses and it’s clear that Amazon and Google lost a few bucks on each sale.

But these speakers are merely tools to bolster the companies' true money makers. For example, you tell the Echo Dot to add things to your Amazon shopping cart. Or ask Home Mini to play a YouTube video on your Chromecast.

That was money well spent however, as it helped the two giants capture the smart speaker market. Globally (excluding China), they are neck and neck, IDC estimates there were 35 million smart speakers before the holiday season. Canalys estimates 33.1 million units were shipped during the whole year. And Apple has zero share in that. 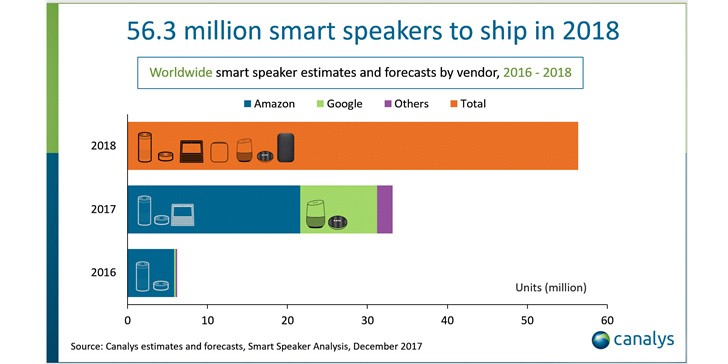 It missed the 2017 holidays and delayed the launch to “early 2018”. The HomePod will cost a hefty $350 too, so the entry fee is quite high. Of course, it’s meant to be an awesome speaker for Apple Music and it will be. Google is already selling the $400 Home Max speaker, which offers far superior audio than the Home and Home Mini.

However, smart speakers are a relatively new product category and many consumers are understandably reluctant to sink a lot of money into one to try it out. $30 is an impulse buy though, especially when you’re looking for a stocking stuffer.

Of course Microsoft’s Kinect offered voice commands 5 years ahead of Amazon’s original Echo. And even though it had the advantage of bundling them with millions of consoles, it failed to capitalize on any of that (yesterday, Microsoft put the final nail in the Kinect coffin).

I wouldn't call them gimmicks, I love getting fast answers on the fly rather than unlocking my phone and opening Google Assistant or another digital assistant. My brother has the original Google Home and he uses to control his lights and change it to...

Well no one is laughing at you now lol I love my Google Home Mini, I hope it keeps selling even though the price is back to $50.

At the moment they are gimmicks. Answer easy questions I could have just googled. Present a problem with security.