After about a year of announcing the RX 400 series of budget and mid-range graphics cards, AMD is back with the RX 500 series. Based on an updated Polaris architecture, the RX 500 series is meant to replace the RX 400 and for those who are planning on upgrading from the R9 series or the NVIDIA equivalent graphics cards from over two years ago or more. Meanwhile, RX 400 series owners need not pay attention as the performance gain here is not worth upgrading to. 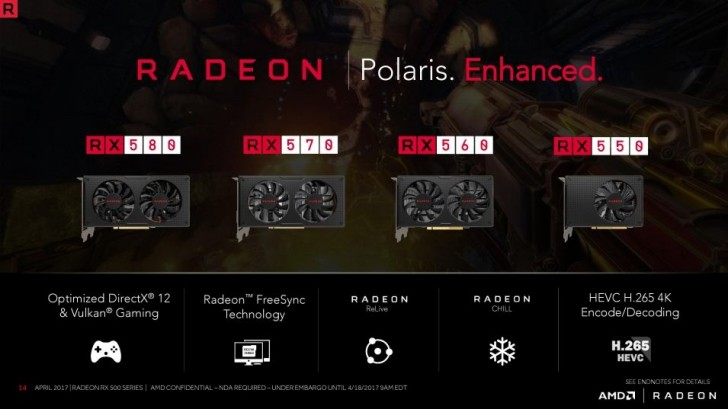 The RX 580 has the same 2304 stream processors as the RX 480 but ups the base clock speed to 1257MHz and the boost clock speed to 1340MHz. Memory is the same 4/8GB 8Gbps GDDR5 configuration with 256-bit memory bus width. The TDP has gone up from 150W to 185W. AMD calls this a 1440p card, which might be overreaching a bit. AMD won't say how much faster it is than the RX 480 (probably because the difference is likely very small) but it does claim a 57% improvement in performance over the R9 380X. The RX 580 will be available in 4GB and 8GB configurations for $199 and $229, respectively. There won't be any reference design cards available so you will mostly just be getting factory overclocked cards at a higher price.

This is the beauty of Windows it gives us options depending on budget or power requirements ... So if you choose to go with power one can get the GTX 1080Ti or Titan XP if you decide on a decent budget PC this RX500 series would be the best...So plea...

I completely disagree with you. Nvidia 1060 it is far superior card, we not talking about only raw power, we talking about Nvidias optimizations to video games, BE performance, and most importantly TDP. In all cases 1060 slaughters RX 580 and so on. ...

I agree with you as of this time we just have to wait for the Vega cards to come out.. the 500 nd 400 series is meant for individuals who are on a budget but would like to experience a bit of VR. But of course the experience will never be the same wi...