AMOLED vs. S-LCD HTC Desire screens fight it out

It's time for round 2 of the AMOLED vs. S-LCD match. It's not cut-and-dry, S-LCD does well in contrast and color reproduction, though not so well when it comes to the promised lower power usage and sunlight legibility.

You've probably heard - there's a nasty AMOLED shortage, which has forced makers like HTC to switch from AMOLED to S-LCD for some of its models, like the HTC Desire.

We've already seen S-LCD vs. AMOLED once, but now there are a few more macro shots and more tests. Here's how the S-LCD HTC Desire did against its AMOLED twin. 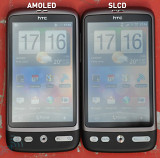 HTC Desire with AMOLED on the left, S-LCD on the right

S-LCD was sharper than AMOLED (which uses an unusual matrix with fewer sub-pixels) and offered better color reproduction along with better contrast. AMOLED parried with more vibrant colors and darker blacks.

Viewing angles on both HTC Desire phones turned out to be very good, but the S-LCD handled vertical angles better, while the AMOLED screen did better when titled sideways.

Sunlight legibility gave a slight edge to AMOLED and a test to verify HTC's claims that S-LCD uses less power than AMOLED showed just the opposite - AMOLED did 30% better. Unless you put the two versions of the HTC Desire side by side, you probably won't spot the image quality difference.

But the power usage gives the AMOLED Desire the edge. Still, tomorrow HTC is announcing something - we have our fingers crossed it's the HTC Desire HD and Desire Z, but we'll let you know as soon as we find out for sure.

per my experince Sony screens are far better than HTC