Xiaomi's Mi Note 10 launched last November sporting the world's first 108 MP camera on a smartphone, as well as one of the most flexible setups at the time, with two telephoto shooters alongside it and an ultrawide and a macro cam. The phone has been doing quite well, sales-wise, and even got a lesser sibling recently in the form of the Mi Note 10 Lite.

One thing that it hasn't so far received is an update to Android 10, which is weird because a lot of other (even older) Xiaomi devices have. Well, the wait is finally almost over for the Mi Note 10, as today the Chinese company has started rolling out an update to MIUI 11 based on Android 10. 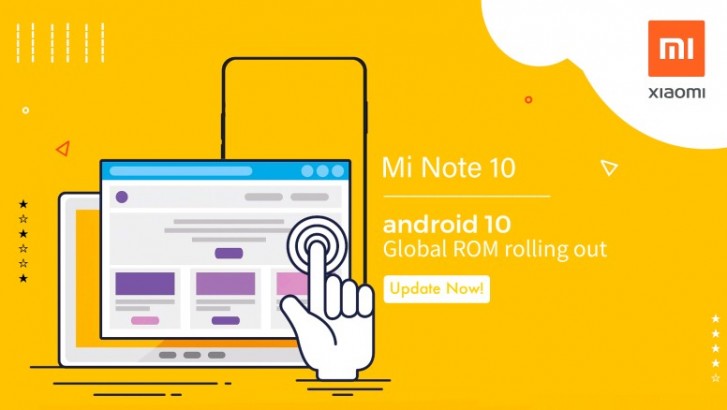 Note, however, that it's a "Global Stable Beta", which is Xiaomi parlance for something akin to a "release candidate". It's not the final version, but should be close to that. If some nasty bugs are found, then the rollout could be halted and a new build would emerge later on.

Also note another caveat, which is that currently this is only going out to "global" units, and that, in Xiaomi terms, means those that weren't meant for China, Russia, India, or the European Economic Area (EEA).

The update is MIUI 11.1.1.0.QFDMIXM, and installing it requires a 2.6GB download. Aside from bringing the Android 10 goodness to the table, it also packs the April 2020 security patch level, as well as the usual assortment of bug fixes and optimizations.

According to reports from users, the camera, fingerprint unlock experience, and overall system speed have been enhanced. There's also a new live AOD feature. However, built-in call recording seems to have vanished in this build.

I just updated to the last version, But in normal voice calls, i can't put the call on loud speaker, normally i press but nothing happens, Even if it work (sometimes), i can't return to normal calling speaker. Weird!

The latest version of Android usually has features ported from miui and other skins. This is why Latest Android versions are always overrated. All they give you is bragging rights on paper. Most ppl don't miss out on much if any.

You are talking about miui updates not android version update.There's difference.