Last week Google officially announced that the next version of its mobile OS is called just Android 10, no more dessert names going forward. That signified that the launch of the stable version is nearing, and this has now been confirmed by two separate chats with Google customer support reps.

In both cases, the two different reps responded to the question of when Android 10 would be released with the exact same answer: on September 3. 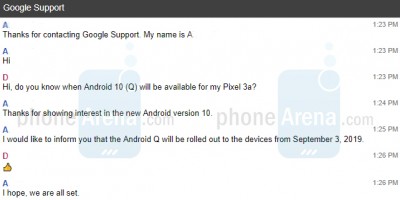 In the past customer support reps have had (and disseminated) bad information, but here things just seem to fit with Google's usual modus operandi. The company has gotten us used to releasing new security patches each month on the first Monday - unless that is a holiday in the US, in which case the release happens the next day. The first Monday of next month is September 2, but guess what - it's Labor Day. So a rollout on September 3 is indeed very likely. Last year Android 9 Pie went out on the first Monday of August, lending even more credence to the September 3 Android 10 release hypothesis.

Whenever it hits, expect to see Android 10 running on all of the Pixel phones, including the original models and the newly released 3a and 3a XL.

I have a Nokia 7.1 plus android one program when I get a android 10 kindly update please

There's a dessert that starts with letter Q. It's none other than Qhinilaw. :-D