Android 2.3 Gingerbread is not out yet despite the old rumors of a November launch. But it should be almost done - Google Hong Kong even used it in a video tutorial for Voice Search. The visible changes are quite underwhelming from what can be seen in the video - but the changes under the hood should prove more interesting.

The notification area color has been changed to black and the icons on it are new. The virtual menu key on the bottom of the screen has been placed on a black background and it's now flanked by two shortcuts. The final bit of UI polish in Android 2.3 Gingerbread is the restyled buttons in the settings menu. 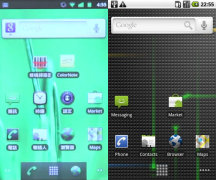 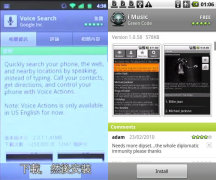 The Android Market received some new tabs - inside the app information page, there are three new tabs, one of which allegedly reads "Related" (but we're no experts in Cantonese, so we can't confirm that).

Here's the video (scroll past the iPhone part in the beginning), shot on what might (or might not) be a Nexus One.

As for the under the hood changes, we've heard support for higher resolutions (so tablets will be officially supported), WebM video support (Google's own video format), NFC support and others.

Android will not get amazing battery life without looking at Symbian code. Symbian still beats Android in functionality. Android is just as complicated as Symbian, going through all those menus. What about that limited ROM for apps, good luck with 4 ...

The only missing thing from android is USB on-the-go,if they would implement it then I surely switch my nokia

Anroid is the biggest right now