Google has once again published the Android distribution figures and things are looking good for Android 4.0, Ice Cream Sandwich.

Of course, some of you might say that it is no longer the latest version of Android and we should be concentrating on Jelly Bean now but it is an important update nevertheless and has had the most profound impact of any Android update so far.

Now coming back to the distribution figures, we see that the total ICS user base has moved up to a respectable 15.9 percent. If you remember, at the beginning of last month it was 10.9 percent and the month before that it was 7.1 percent. This means that the ICS user base has more than doubled in the past two months. 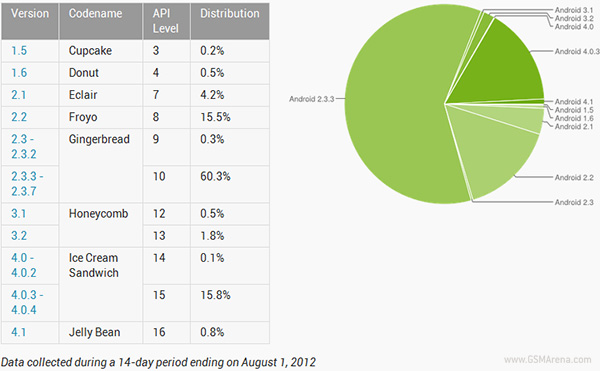 ICS has also, for the first time, overtaken the user base of Froyo, which now stands at 15.5 percent, down from 17.3 percent last month.

Gingerbread, however, still commands the majority of the Android user base, with a staggering 60.6 percent. Still, it's down from last month's 64 percent.

For the first time, Jelly Bean has made an appearance on the chart but as usual, it has had a weak start, having just 0.8 percent of the total user base. That was expected, considering mostly Google's own devices are running it at the moment.

Next month, hopefully, ICS will make greater inroads into the Gingerbread figures and Jelly Bean would have spread to greater number of devices.

it's rolled out for the Nexus range,, put it on a Nexus7

u r the only one in the world who have it