T-Mobile was the first to unleash the official Android 4.4.3 KitKat update on its Nexus (4,5,7) lineup. Then Motorola begun updating the Moto X, Moto G and Moto E.

Today the entire Google Play Edition phone lineup has been treated to Android 4.4.3 KitKat. The OTA firmware is available for HTC One, HTC One (M8), Samsung Galaxy S4 and Sony Xperia Z Ultra. There is no info on the LG G Pad 8.3 slate, but we bet it will be getting it very soon if not already. 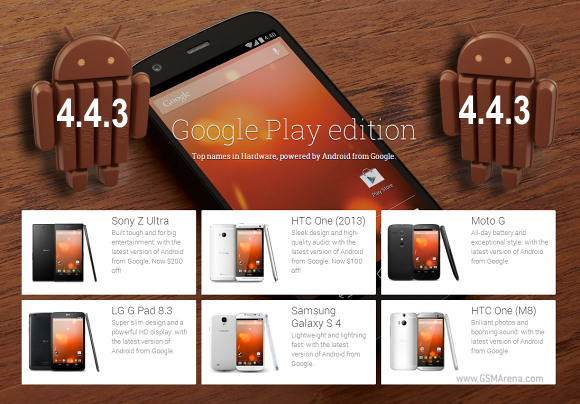 The owners of Nexus devices outside T-Mobile are still waiting on the over-the-air update although Google has already release the official factory images. We guess Google should take care of this soon too.

Android 4.4.3 is a minor update bringing a refreshed UI in the Phone app, plus critical bug fixes, stability and performance improvements.

I'm having moto g 2nd generation XT 1068....but I'm not getting the android update...I even tried manually in system updates..but it's saying ur system is up to date..can anyone help in this mater...