Google Now is definitely one of the most interesting of the Jelly Bean novelties. To put it simply, it's Google's version of Siri, but it learns constantly about you from your daily routines. The weather sites you look at, the news and videos you watch in the morning and the routes and calendar appointments you create daily - Google Now uses them to give you provide better, more accurate results to your searches. 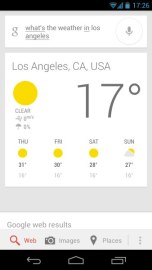 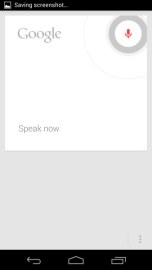 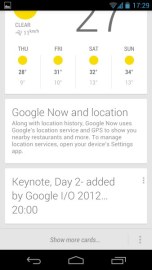 The service interacts with you by generating cards, which gives you short overview of information it believes is relevant to you right now. Going to work in the morning? Google Now knows this and lets you know there's a big traffic jam on your usual way to the office, so it offers you a re-route.

It can interpret a lot of things from your search history as well. If you've been searching for, let's say, your favorite football team, Google Now will prepare a card showing you the next match the team is playing and will provide you score updates once the game begins.

Check out its promo video:

Sounds creepy at first, but could prove to be really handy eventually. It interacts really nice with Google's new Voice search, too.

Naturally, search is where Google excels. And with its enhanced looks and heavily updated Voice search, it gives Siri a run for its money.

Now you can ask Google everything you want to know in natural human language. "What's the tallest building in the world?" would bring you a cool looking card carrying the answer and an photo of Burj Khalifa. To top things off, Google's Voice Search assistant will read the answer to you, so you don't even need to look at the screen. 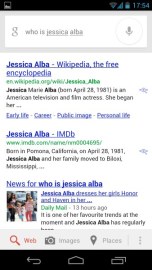 It's not witchcraft this Google Voice Search. It utilizes the company's Knowledge Graph to gather the snippets of information needed to give you a satisfying answer. That's certainly bringing us a step closer to a more advanced virtual personal assistants, but just like the competition, Google's assistant need to go a long way before it becomes useful for daily tasks.

Voice typing now works offline. To make it happen, Google has baked the voice recognition algorithms needed to make it run into Android itself. Not only does this make Voice typing faster, but also eliminates the need for internet connection.

With Jelly Bean, the Android keyboard's nuts and bolts got updated as well. It now features smarter dictionary algorithms and the more you write, the better it can predict your words as it's learning algorithms let it unveil its full potential. 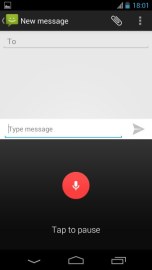 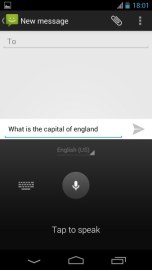 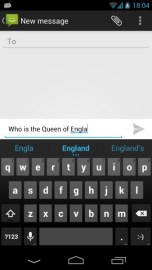 So for example if frequently write "I am going home, see you in 15 minutes", the dictionary will be able to predict words and phrases like "home" and "15 minutes". It resembles Swiftkey's smart dictionary system, but only time will tell if it performs as well.